Raipur: Chhattisgarh has begun an ambitious programme to increase the population of the wild buffalo through cloning.

As a first step towards this goal, the government has set in motion the process for preparing a clone of Asha, the lone female wild buffalo left in the state’s Udanti Wildlife Sanctuary, about 150 km from here, in Gariaband district. Though there are eight other buffaloes in the 247.59 sq km sanctuary, Asha is the only female.

With Asha getting old, there are fears that she might die leaving the state staring at extinction of the rare species.

Forest officials estimate there are several wild buffaloes at the Indrawati national park in the Bastar region’s Bijapur district, but it is virtually impossible to undertake a census in the Maoist stronghold.

The fact is that numbers have been dwindling, said an official, adding that the government has invited biotechnology expert S.K. Singla of Hisar, Haryana, to Udanti to prepare Asha’s clone.

“The work is likely to begin this month with Singla sending his senior assistant Ajay Kumar to Udanti to take Asha’s sample cells,” said Gariaband divisional forest officer Ashutosh Mishra. The government has already given a Rs.10 lakh cheque as part of the project.

Chhattisgarh’s state animal, known locally as ‘ban bhainsa’, is similar to the bison in appearance but is a different species. It is a rare animal and found only in some state sanctuaries, including Indrawati. 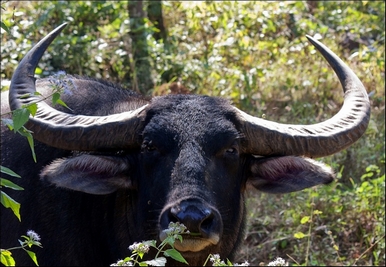 According to the government plan, the Hisar scientists will take 10-15 samples of Asha’s somatic cells and after completing chemical and heat treatment implant them in the egg cells of a special species of domestic buffalo found in Haryana.

Detailing the procedure involved, experts said the most common cloning method, known as ‘somatic cell nuclear transfer’, or simply nuclear transfer, requires two kinds of cells. One is a somatic cell, which is collected from the animal that is to be cloned (known as the genetic donor). A somatic cell is any cell other than a sperm cell or egg cell and contains the complete DNA, or genetic blueprint, of the animal it came from. For cloning purposes, somatic cells are typically obtained by a routine skin biopsy performed by a veterinarian.

The other kind of cell required for cloning is an egg cell, which is collected from a female of the same species (known as the egg donor). In the lab, a scientist extracts and discards the nucleus of the egg cell, which is the part of the cell that contains the egg donor’s genes. The scientist then inserts the somatic cell from the genetic donor into the egg and “fuses” the two with electricity. The resulting fused egg contains the genetic donor’s DNA.

The fused egg is stimulated, “activating” the egg, and causes it to divide just as it would have in conventional reproduction. As cellular division continues over the course of several days, a blastocyst (early-stage embryo) forms.

After about a week, an embryo transfer specialist transfers the blastocyst to a recipient female. After a full-term pregnancy, the recipient gives birth to an animal that is essentially the identical twin of the genetic donor.

If the project succeeds, the same method will also be adopted for increasing the number of other critically endangered species like bison, lion and leopard.