No. It is not her I am going to write about. Much as I might want to. This here is a more pressing hirsute issue that needs to be cut to size or waxed away, as the case may be, on priority.

From the waiting that one has to do, it seems that there is major barber supply side problem. Or is it because after Women’s Liberation (when was that?) most erstwhile common barbers have switched to work in high end saloons and beauty parlours?

And this after the price of a hair cut has gone through Barber-Ra’s roof. Uff-O! She keeps distractin’ me. 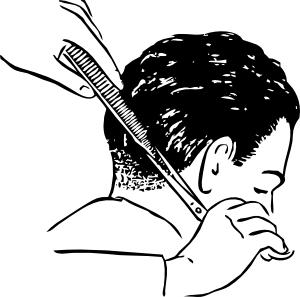 Also, ever since hair cuts have started making a hole in the pocket, strangely colleagues have stopped talking about where they go to get their do.

In smaller towns like Shimla there are Beauty Parlours or barber shacks only; the latter frequented by all and sundry.

On one occasion as I peeped into my regular barber’s shop which seemed quite full, a guy half shaven suddenly got up, the barber taken aback, and said “Jai Hind, Sir”.

Everybody in the shop gawked at me with wide open mouths even as my ears turned crimson. Later I consoled myself; a hair cut like death is a great leveler.

For a country of 1.3 billion plus and with half a billion women (adjusted for active Gender bias ONLY, missing girls not taken into account), I would have thought that hair cutting could be a huge source of unending employment generation, even if you subtract say 13.99 million “taklas” (the bald)?

Especially, for our armies of unskilled graduates and PGs! Why, even the taklas need a good Champi-tel-malish (head massage) every now and then?

But do our ITIs and other vocational schools have diplomas or degrees for hair cutting or human hair wigs & handicraft courses?

Or is it that our BPL brethren (as per Planning Commission’s arithmetic) don’t need luxuries like a bi-annual haircut or a monthly shave?

It certainly does not seem to be built into the Rs 26 per day logic or seen on TV screened faces of pedestrians and hangers-on whenever there is bomb blast in a busy market.

One must concede though that straightforward hair cutting has now graduated to a skilled and expensive hair styling business. Ask Shahnaz Hussain.

So even in small barber shops you would see a chart of a hundred hair styles for kids, teens, adolescents, the young, soldiers, mid life crisis-stricken and of course the balding and beyond.

“Barbering” has diversified too.

Hair coloring, multicolor punk dyeing, bleaching, streaking and what not!

And for the stronger sex there can be no compromises on quality. The story of a lady, stricken with those most cruel of women’s afflictions, hair loss, sold her diamond wedding ring to get a semblance of a mop back on her head, comes to mind.

Her new found hair did not stay for too long whereupon she went and sold off all her jewelry to buy a fancy imported wig. And was divorced by her husband soon after.

Or of the punk with such bright hues on his head that when he walked on the Mall in Shimla, the otherwise intrepid monkeys ran for cover wondering from where this alien creature cometh.

Once, not finding a slot in any of the packed barber saloons (as they are called in Delhi), I opted to get it done under the shade of a beautiful, expansive Neem tree. I was the only customer.

One was free to smoke and wink at damsels passing by and as a bonus got a free Champi-tel-malish; and while he was at it, the fellow regaled me with a Bojhpuri version of Mohammed Rafi’s classic Sar jo tera chakrae.

The barber was chatty too, but asked too many probing questions. With the crew cut he did on my head I did not need another do for two months. Cost effective.

And, Barber Ra was there, to laugh and click my pictures too!