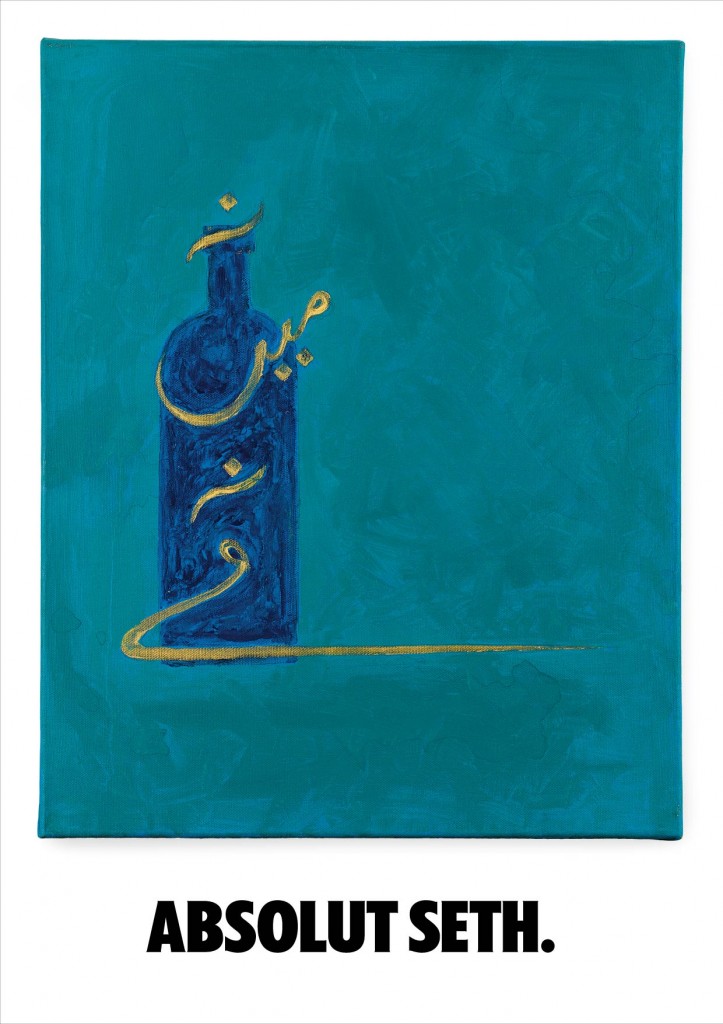 New Delhi: Art is a natural extension of novelist-poet Vikram Seth’s literature. The writer says he likes to paint — both in words and colours — to create organic shapes with distinct calligraphic identities and poetic sensibilities.

The author of “A Suitable Boy”, who went public with his mastery over the intricate art of Chinese, Arabic and Devnagari calligraphy in his anthology of poetry, “The Rivered Earth” last year, unveiled three word paintings for Absolut Vodka’s creative art brand in the capital Friday.

For the last 30 years, the brand has been blending spirits with refined artistic creativity to carve a niche brand for itself in the market.

The acrylic paintings with multi-dimensional surface textures in basic earth colours of orange, green, blue, gold and black, were conceived around the impressionist motifs of Absolut Vodka bottles framed by calligraphy for a new-media text-art effect.

Below each canvas were etched two lines of Seth’s poetry to capture the essence of the visuals.

The character embraces what is his/what it is… The stray couplet at the bottom of the “Chinese-Jiu-Vir Rasa” canvas explained the mood of the orange-and-red outline of the bottle and the flamboyant characters embracing the heady illusion the bottle represented.

Jiu is the Chinese character for wine.

“I have studied Chinese calligraphy for 15 years from my master Zhao Yizhou. When I was in China (early in his career), I used to write calligraphy with a ball pen.

“When I got this urge to learn calligraphy, I could not find a teacher. One day, I went to a bookshop in Chinatown to look for a book on calligraphy… I talked to the woman at the shop and she said ‘I know someone’. That is how it happened,” Seth recalled in an informal chat with the media during the unveiling of his paintings.

Green is the theme of Seth’s “Pyasa Pyala (The Thirsty Cup)” that takes off on Harivansh Rai Bachchan’s “Madhushala” in Devnagari calligraphy.

The frame is arranged in a Omar Khayyam-like sequence with two impasto (thickly pigmented) bottles and a hint of a crystal goblet floating in space.

Seth describes it as “The Emerald Cup, the music high above/The dreaming earth, all thirst for hidden love”, a couplet reminiscent of his poem, “The Rivered Earth”.

“The canvas represents the shringar rasa (love),” the writer said.

The third canvas, “Na Main, Na Mai” in Urdu and Nastaleeq script, painted in a palette of blue and gold, is “shanta (peace) rasa”.

“In Blue and Gold, I watch the evening sky/Darken, till neither remains nor I”, Seth says of the canvas in a rush of nostalgia.

It was Arab Spring when Seth was painting the canvas and his teacher, Nasser Mansour in Jordan, had to vet the writer’s calligraphy before he decided to exhibit it, the author of “The Golden Gate” recalled.

“He had a teacher, Rathin Mitra, in school who taught him to draw. He has reconnected to painting after moving to England,” Leila Seth recollected.

The writer shifted home to England after buying a country home, the old Rectory in Salisbury owned by maverick 17th century metaphysical poet George Herbert, in 2003.

Currently the writer is waiting for “A Suitable Girl (sequel to A Suitable Boy)” to emerge “as and when she chooses to”.