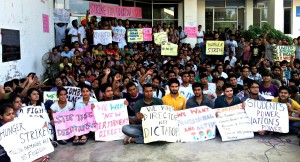 Hoshiarpur: UIET Hoshiarpur students have taken the tough call of going on a strike against the college administration. The strike was initiated on 24th August and today it has entered in its seventh day.

The MCA and B Tech. students have called for the strike and they are asking the college administration to listen to their demands and provide them with better administration.

Students were seen sitting on the ground, shouting slogans, and holding placards. On condition of anonymity, a student let Hill Post know that they were against the college administration because they were allegedly treated as slaves. It is believed that the students have support of their alumni as well who are supposedly pushing the strike from outside. 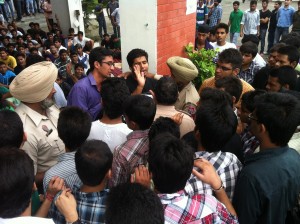 Students’ demands include a new Director of the Institute in place and a new Placement Officer as well. The students also complained about their placement issues. They were also demanding combined placements with UIET Chandigarh.

The students also lamented the fact that the student to faculty ratio in most departments is a paltry 50:1 which falls way below the UGC standard.

The vice-chancellor sent a two member committee on 28th Aug which could not arrive at a conclusion. The VC then called for an eight-member student committee to visit his office on 31st August.

Upon listening to their problems, the VC promised placements at the PU Chandigarh campus. The VC also assured to begin the process for the appointment of a TPO soon. New faculty has been recruited which will be joining the institute by mid-September.

The VC will today meet with faculty members to hear their take on the issue and the decision to appoint a new permanent director will be taken later in the day. The students have refused to call off the strike until the new director is appointed.

Police was seen in the college premises and students were repeatedly asked to call back the strike. The students are using Social Media to spread the word and they have even started a blog to spread the news online.

College administration was not available for any comments.

Few days ago, NIT Kurukshetra students also raised their voice with the help of Facebook and Social Media. NIT Kurkushetra students too were demanding resignation of their Director. 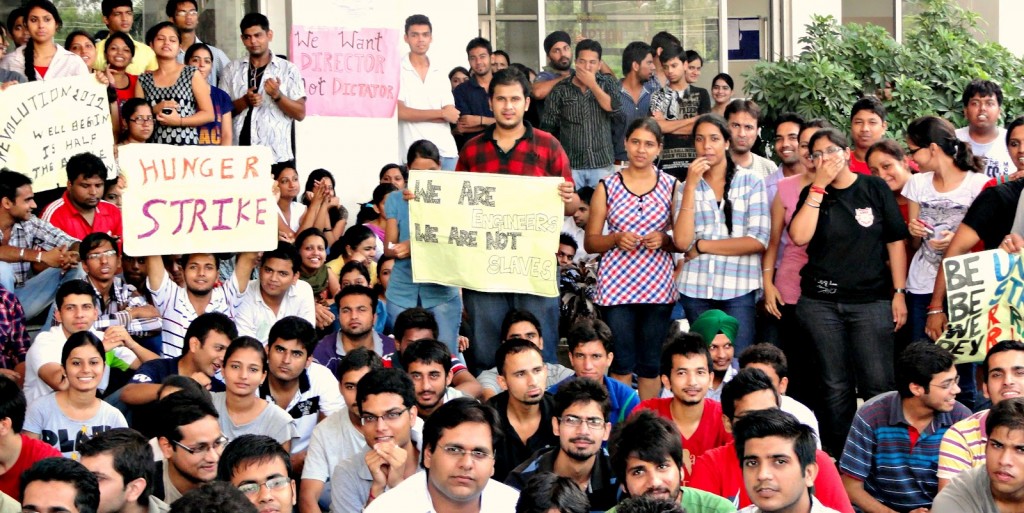 Today the strike has entered into its Seventh day and by the time this news was written, student representatives were still in a meeting with the administration.