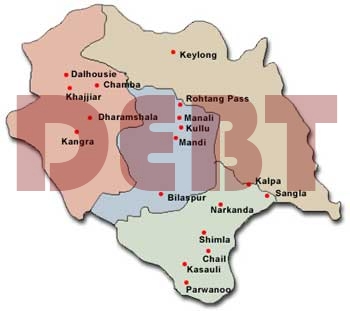 Shimla: Less than two months before the assembly polls, Himachal Pradesh Chief Minister Prem Kumar Dhumal has apparently made a contribution towards his vote bank by announcing another poll bonanza for the state’s over 300,000 ‘babus’, or bureaucrats.

The fund-starved BJP government, reeling under an ever-swelling wage bill, has announced the grant of grade pay scale, the highest ever revision of basic pay scales. This announcement will come as a Rs.500 crore burden on the state exchequer.

The chief minister made the announcement at a public rally in Shimla earlir. He said that his government, in its 56-month tenure, has extended financial benefits worth over Rs. 7,000 crore to its employees.

Government officials said the grade pay scale will benefit 250,000 regular employees of different departments and 50,000 employees of boards and corporations, most of which are loss-making.

“The employees are the backbone of the government. We have provided record financial and promotional benefits to them despite financial constraints,” Dhumal said.

The opposition Congress sees the government’s pre-poll benevolence as a drive to strengthen election prospects.

“The government is giving what was due to its employees, who have been long deprived. Now as the polls draw near, the government goes overboard announcing sops, schemes and bonanzas,” Leader of Opposition Vidya Stokes said.

“The people understand the timing and the motive behind the announcements. How can they forget the government’s misdeeds of extending favours to (infrastructure group) Jaiprakash Associates Ltd. in setting up projects and to the HPCA (Himachal Pradesh Cricket Association)?” she asked.

The government has been accused of providing several pieces of land to the HPCA, controlled by Dhumal’s son Anurag Thakur, a BJP MP.

Political observers believe Dhumal is going the way of the ruling party in Punjab, which too made similar announcements before the assembly polls.

Himachal Pradesh does not have an independent pay commission to fix pay scales of its government employees and is following Punjab in pay fixation.

Punjab had granted grade pay scale in December last year and the employees had been pressuring Dhumal to bring them on a par with their counterparts in Punjab.

“With the granting of grade pay scale, every employee will get a monthly hike from Rs.400 to Rs.1,400. It’s a huge burden on the exchequer. Under such circumstances, the government is not in a position to meet the monthly salary and pension bills beyond December,” a finance department official said.

On Independence Day, Dhumal announced the release of seven percent dearness allowance, which will cost Rs. 350 crore to the state exchequer, to all state employees and pensioners, due from January.

Himachal Pradesh’s loan liability is Rs. 26,651 crore and it has paid Rs.2,146 crore as interest on borrowings in the past one year.

The state’s loan liability till June 30 includes Rs.10,504 crore from the open market and Rs.943 crore from the central government, Dhumal told the assembly in a written reply Tuesday.