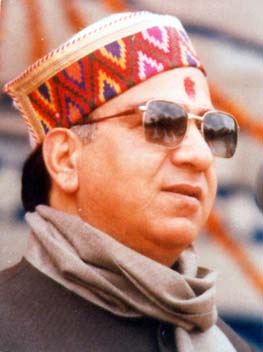 Palampur: The Himachal Pradesh Lokhit Party (HLP) leader Dulo Ram said that he will contest elections from Palampur, the pocket borough of BJP National Vice President Shanta Kumar. Once a loyalist of BJP veteran Shanta Kumar, Dulo Ram said that both BJP and Congress neglected the Kangra district as far as development is concerned. He blamed Shanta for denying Kangra and Chamba from Cement plant during Shanta’s tenure as the CM of the state. It must be noted that Dulo Ram had been BJP’s vice-president and also member of the state Election Committee

Dulo said,”Mandi, Kullu, and Shimla were developed in the name of tourism and apple, where as Solan, Una, and Solan were developed as industrial areas, but Kangra, which gives 16 MLA’s in 68 seat assembly was ignored by both these parties.”

He said, “HLP will contest all 68 seats except those from where the CPI and CPM shall field their candidates.” Dulo said that the party will declare its election manifesto on 28th September at Mandi rally. He said that he is in the favor see Palampur a district, but the new districts should be created on the physical reorganization of the state.

Dulo Ram had earlier merged his political outfit, Himachal Gaurav Manch, with the HLP. Immediately after his induction, he was made a member of the HLP’s manifesto committee.

The HLP leader urged the Election Commission of India to direct the state government to stop misusing the official machinery and getting half-completed projects and schemes inaugurated by the CM investigated. There have been large-scale transfers going on to position persons close to the BJP at key positions to influence the election process, he added.