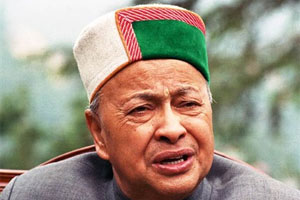 Shimla: Not all issues about leadership in Congress here appear to be settled if one is to consider an offhand remark of former union minister Virbhadra Singh who on being asked on Thursday about who would be fielded as the party’s star campaigner responded, ‘Mein toh timtimata diya hoon’ (I’m a flickering lamp).

To a question about regional imbalances existing in the party, something that Kaul Singh Thakur, who was unceremoniously removed as party president as the state heads into elections, has been raising; the veteran congressman responded, “Where is a regional imbalance as I represent Mandi parliamentary seat and Kaul Singh is an MLA from one assembly segment in it?”

Regarding election issues, Virbhadra let the media know that large scale land sale would be a prominent issue on which the ruling party would be exposed.

When pointed out that the government had brought out documents showing involvement of one of his close relative in possessing land beyond permissible limits and also of resorting to illegal sales of land, he said, “instead of making a political issue out of it, the government should take action under law against anyone found guilty of violating it.”

Targeting Ravinder Ravi, a cabinet minister and Rajiv Bindal, a former minister, in the Dhumal, he said that even senior BJP leader Shanta Kumar has been questioning the role of ministers.

When quizzed about controversies over running of the Vivekanand Trust Hospital at Palampur, which is headed by Shanta Kumar, the congress leader said that it would have to be studied.

Roads were in bad shape and accidents with high causalities are the order of the day, he said, while the ministers are busy buying luxury cars for themselves.

Virbhadra alleged that all new buses procured for the state transport services were deployed in Sarkhaghat division, from where the transport minister Mohinder Singh hails.

On the eve of elections, the government has loosened strings of an empty purse, and built up an enormous liability that the congress on winning elections will have to foot, said Virbhadra.

In response to a scam in the steel ministry, the former union minister said “it was not for the period when I was heading the ministry.”