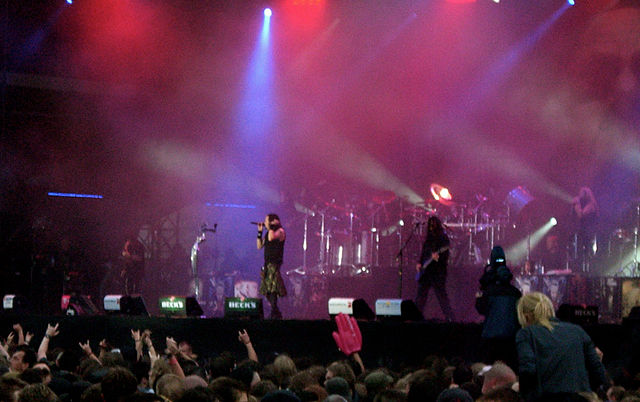 New Delhi: A crowd of over 5,000 people, most of them dressed in black, swayed to the tunes of Grammy award-winning metal band Korn as they belted out their popular numbers during the first leg of their India concert here Wednesday.

It was a treat for fans when the band sang “Get up”, “Falling away from me”, “Freak on the leash”, “Blind” and “Narcissistic cannibal”.

Overwhelmed with the response, Davis thanked the crowd and said: “Thank you so much for bringing us here in India. You guys are incredible. We really appreciate the love and affection you have shown to us. We love you.”

The band always dresses in black and majority of their fans came decked up in black T-shirts and jeans, with many of them having “KORN” written on them. Some were even seen flaunting tattoos similar to those sported by the band members.

While the crowd was a mix of Indian and foreigners, the majority were from India’s northeast region.

As the concert gained momentum and heavy metal beats started growing on the crowd, the excitement levels reached a crescendo. If some indulged in hardcore head-banging sessions, others jumped to the tunes of the song. Some even took off their shirts and started shaking a leg.

The scene was such that it seemed that the beats transported them to another world.

Another highlight of the performance was when Korn sang Pink Floyd’s popular track “We don’t need any education” and wooed the crowd saying: “All you guys know the lyrics, so just sing it along with us.”

The fans were in for a surprise when the four band members threw drum sticks, drum sheets and CDs of their new album “Pathway of Totality” towards the crowd as a goodbye gift.

“It’s hard to believe that such marvelous performances are happening in India. It was hard to imagine that we could one day be seeing Korn performing live in front of us. Even the band seemed excited to see that they have such a huge fan following in this country,” Vinay Sharma, an IT professional and an ardent Korn fan said.

For him, it was a way to get rid of frustration.

“I have been listening to such kind of music for the past eight years and it helps me get relaxed and get rid of my frustrations of life or workplace,” he said.

Ananya Mishra, another fan, said: “This band has some kind of a sparkle in them, which is unlikely in any other singers. I really enjoyed the performance. When Metallica’s performance was cancelled, many were left disappointed, but after seeing this becoming a success really feels nice.”

After Gurgaon, the band was scheduled to perform in Mumbai Sep 7, but due to incessant rains, the gig has had to be cancelled. They will now perform in Bangalore Sep 9.