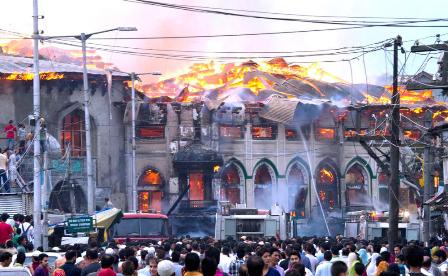 Srinagar:  At a time when the J&K government has ordered a fire audit of shrines and other government buildings after recently a historic shrine was gutted in fire, investigation has revealed that the lack of updated fire safety law jolts a blow to their effort.

Chief Minister Omar Abdullah sometime back had ordered a fire safety audit to all shrines, hospitals in the state, while there is still no update on the fire safety audit, sources in the Fire and emergency department dismiss idea as a useless one, saying that they hardly have any authority to enforce Anti Fire regulations.

The officials at the helm of affairs privately admitted the moves as an eye wash, “Nothing will happen after the audit. After the survey, if we will explore lack of safety arrangements in shrines, hospitals, what we will do. We have no powers. Until and unless we are given some powers, the problem cannot be solved.”

He also said that lack of powers has made them handicapped in terms of checking and monitoring the hotels, government buildings, shopping complexes and other large closed places of gathering.

“Being a district officer, I cannot enter any hotel or complex in Srinagar to check the safety measures. They will not allow me. The main thing is that I am also not legally competent to force my entry into the place to check where it falls in terms of safety measures.”

He said, their role has been reduced to minimal in recommendation of giving permission for construction and safety measures. “I will give you an example of hotels.Tourism department approaches us for approval of construction of a hotel by a private party. We go and check the safety measures. We recommend them whatever will be the status. But problem is it is issued only once. It should be on regular basis, yearly or so. It should not be a one-time affair.”

Director  General Fire and Emergency Services, Ghulam Ahmed Bhat said, “No, there is a fire safety act 1967,  still we have sent a new set of recommendations for revision of law and to include many new things which is likely to come up in the month of February.’’

Upon inquiring about powers in the inspection of hotels and other places of get together, he said, “You can understand that turmoil of last 20 years has thrown many things out of gear, so we also could not take major works.” Bhat said.

“We have now started fire safety audit of hospitals and nursing homes. We will start of other establishments also when funding is released.”