Paris: India’s low-cost sanitation NGO Sulabh Sauchalaya is all set to go global by expanding its footprint in 50 developing countries to push the implementation of the United Nations’ Millennium Development Goals (MDGs), its founder says. 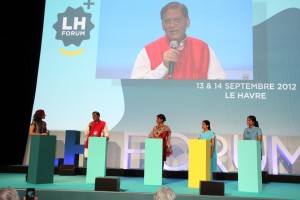 Addressing European leaders and business tycoons at the LH (La Harve) Forum, Indian low-cost toilet innovator Bindeshwar Pathak appealed to the business community Friday night to focus on the sanitation sector to help achieve its MDG as early as possible.

“My future course will be to propagate the idea of sanitation throughout the world especially in Africa, Asia and Latin America and this will be helpful in achieving the Millennium Development Goal,” he said.

Pathak favoured the Sulabh Sauchalaya model for Western countries as well, saying: “In western countries, they have sewerage systems that are very expensive to construct and maintain. They require enormous quantities of water to flush and also pollute the atmosphere. They also cause global warming as gases generated from human waste is discharged into the atmosphere.”

“Sulabh also want to set up the first University of Sanitation in India. My other step will be to publish an Encyclopedia of Sanitation,” he said.

Recognising his contribution and pioneering work in the field of low-cost sanitation and social uplift, the LH forum had invited Pathak to share the success of the Sulabh model with world leaders and business tycoons.

The MDGs are eight international development goals that all member states of the UN agreed to achieve by 2015. One of the MDGs is sanitation.

“Your personal and professional achievements among which your staunch dedication to the integration of the untouchables in India, alongside with your entrepreneurship sense led us to invite you,” LH Forum President Jacques Attali said in his opening remarks.

Pathak and his team have developed an indigenous two-pit toilet technology that is not only cost-effective but can also be used for producing biogas. Recycling and reuse of human excreta for biogas generation is an important way to get rid of health hazards.