Srinagar: If you commit a traffic offence in this Jammu and Kashmir summer capital, don’t be surprised if you are politely stopped, given a glass of water and educated about your mistake. It’s called ‘Gandhigiri’, taking a leaf out of the way Mahatma Gandhi would have dealt with such issues – and it is producing positive results.

“Violators are stopped, served a glass of water and then educated about the risks to their own lives and those of others due to their errors,” said Watali.

Unrelenting in his resolve and accompanied by other officers of his department, Watali has been holding roadside awareness camps during the past one week, be it rain or sunshine.

“Seeing such a senior officer advising you like an elder brother is very impressive. I have decided never to ride my motorbike without a helmet henceforth,” said a youth who attended one of the awareness camps in the city.

‘Gandhigiri’ is a relatively recent term that owes its origin to a Bollywood musical comedy of 2006, ‘Lage Raho Munna Bhai’ in which the ideals of non-violent persuasion advocated by Mahatma Gandhi were out into practice to address various problems faced by Indians in the present day society.

The awareness campaign is also focussed on ‘stunt bikers’, who use roads and streets for performing stunts in moving traffic, Watali said.

“Stunt biking is a major challenge which needs to be checked immediately. Civil society has also voiced serious concerns about the menace which is a grave danger to the lives of the riders and those using the roads for normal passage,” he said.

The officer said that parents must cooperate with the traffic authorities in order to ensure violation-free passage of traffic in the city, which has a population of 1.3 million. 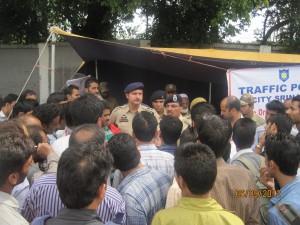 “After the present awareness campaign ends, we will strictly enforce the law against the violators,” Watali said, maintaining that his ‘Gandhigiri’ campaign has already started yielding results.

“Many parents have started coming to us promising complete cooperation. They said even if heavy fines are imposed on their wards for violations there would be no complaints. After all, the safety of the wards is the prime concern for them,” the officer added.