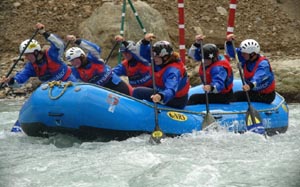 Srinagar: After years of hectic lobbying by J&K government, Jammu and Kashmir on Friday saw the light of maiden Kayaking and Canoeing Championship at hilly resort of Sonamarg.

Minister said that government has taken various initiatives for the promotion of adventure tourism in the State adding that organizing this Kayaking and Canoeing Championship is an important milestone in this regard.

Main Altaf said that Sonmarg is an ideal place for sports activities. He said Sonamarg will be developed as number one Ski resort in coming years and it will be known as a tourism hub which will boost the economy of the people of the State especially in Ganderbal and Kangan areas.

He assured all possible help of the government for organizing such activities and said he will organize a meeting with Ministers of Youth Services & Sports and Tourism for the promotion of this game.