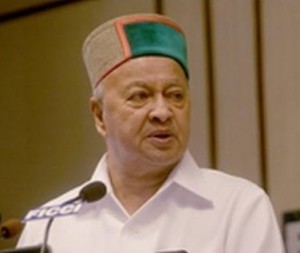 Shimla: Former union minister and five-time Himachal Pradesh chief minister Virbhadra Singh is determined to lead the Congress in the upcoming assembly elections. And will ensure he is not sidelined like Harish Rawat in Uttarakhand, who steered the state’s election but was overlooked as chief minister, say his aides.

Virbhadra Singh, who quit Prime Minister Manmohan Singh’s cabinet in June over corruption charges, does not want an Uttarakhand repeat in his state.

“Raja Saab (as Virbhadra Singh is popularly known) knows very well that if the central leadership can use the services of Harish Rawat during the polls (in Uttarakhand) and later overrule his claim for chief ministership despite his political clout, it can happen with him also,” said a loyalist.

In the run-up to the assembly elections, a shrewd Virbhadra Singh is clear about his role in ousting the Prem Kumar Dhumal-led Bharatiya Janata Party (BJP) government.

Political observers feel the septuagenarian leader, who has been in the Congress for about five decades, has been bargaining hard with the party leadership to make his presence actively felt in the state politics. For this, he wants that elections should again be conducted under his leadership.

A legislator and Virbhadra Singh’s close confidant told IANS that he’s upset on two counts – first, the way the leadership constituted the jumbo campaign committee, of which he is the chairman, without consulting him; second, that he has no say in the ticket allotment process.

“He has also expressed his keenness to return to state politics by re-contesting the assembly poll,” he added.

Sources in the Congress party said his detractors want that the ticket be given to his wife Pratibha Singh.

“They knew that if Virbhadra Singh re-enters state politics and wins the election, then he will be the frontrunner for the post of chief minister. This is what he is eyeing now,” a senior party leader, who didn’t want to be identified, said.

The former union minister, who resigned as micro, small and medium enterprises minister June 26 in the wake of a Shimla court order in a 23-year-old corruption case, Wednesday said there was no question of him quitting the Congress and floating or joining some other party. He was, however, candid about his unhappiness over party affairs in the state.

“I am still a loyal worker. In case things don’t change, I would… prefer to retire from politics and with a bag of beans go back to my farm,” Virbhadra Singh told IANS.

He said after the daylong meeting with 13 of the party’s 23 legislators at his private residence in Shimla Wednesday: “The writing on the wall is clear. If the party doesn’t want to read it and has a suicidal wish (of not coming to power), what can I do.”

Virbhadra Singh, who left Friday for Delhi, is likely to meet top party leaders, including president Sonia Gandhi, Saturday. He seems confident that the high command will appropriately address his issues.

He had already aired his grievances at his meetings with general secretary Digvijay Singh and Sonia Gandhi’s political secretary Ahmed Patel July 27.

Though elections to the 68-member Himachal assembly are due in December, they are likely to be held earlier in October.