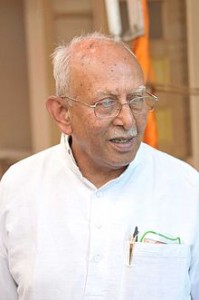 Mysore: Former Rashtriya Swayamsevak Sangh (RSS) chief K.S. Sudarshan, who was missing for about five hours after he went for a morning walk in this Karnataka city Friday, was traced at a place near his residence, police said.

After a frantic search by the police and many RSS activists, Sudarshan was traced at a nearby place, around two km from his residence, said an RSS official.

The over 80-year-old Sudarshan, who is visiting his brother in Mysore, about 130 km from Bangalore, went for a walk around 6 a.m. A police complaint was lodged after he did not return five hours later, a Mysore city police spokesperson told reporters.

“He has been found and is safe,” the spokesperson said.

Sudarshan led the RSS till 2009 after which he voluntarily stepped down due to health problems. An RSS official said that he suffers from dementia which is increasing with passing age.