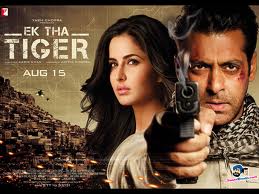 Mumbai: Actor Sonakshi Sinha, who had earlier stated that “Ek Tha Tiger” will be a super hit, is happy that her prediction has come true.

“Yes, I have seen it (‘Ek Tha Tiger’). I saw it on the day of its release and it’s a fun film. It has taken a very good opening, like I had predicted,” the 25-year-old said here Monday on the sets of Dance India Dance Super Kids.

“You know, he (Salman Khan) is doing very well at the box office and I wish the entire team all the best,” added the actress who debuted opposite Salman in “Dabangg”.

Sonakshi, who had come to promote her forthcoming film “Joker”, is happy that kids have developed a special liking for her film’s main characters, the aliens.

“Kids are a very, very strong market because when kids come they have to bring along their parents. That’s great for us and luckily the kids have taken such a liking to these little aliens and even adults are reacting very nicely. It’s different, they have not seen something like this before,” Sonakshi said.