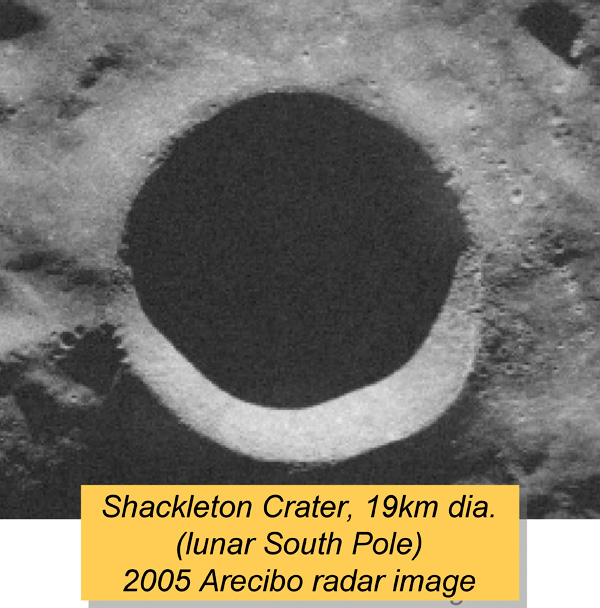 London: Small patches of ice make up five to 10 percent of material in walls of the permanently shadowed Shackleton crater, located near the lunar South Pole, as due to a small tilt in the lunar spin its interior is permanently dark and very cold, a study says.

Scientists using the Mini-RF radar on NASA’s Lunar Reconnaissance Orbiter (LRO) have estimated the ice percentage by weight, according to the team led by Bradley Thomson at Boston University’s Centre for Remote Sensing.

The small tilt of the lunar spin axis means Shackleton’s interior is permanently dark and very cold. Researchers have long thought that ice might collect there.

“Several of the instruments on LRO have made unique contributions to this story, but only the radar penetrates beneath the surface to look for signatures of blocky ice deposits,” adds Keller.

These are the first orbital radar measurements of Shackleton crater. The observations are consistent with the presence of small amounts of ice in the rough inner wall slopes of the crater, says Thomson and colleagues, according to a Boston statement.

“The interior of this crater lies in permanent shadow and is a ‘cold trap’ — a place cold enough to permit ice to accumulate,” says Mini-RF’s principal investigator, Ben Bussey of the Johns Hopkins University Applied Physics Lab.

“The radar results are consistent with the interior of Shackleton containing a few percent ice mixed into the dry lunar soil,” adds Bussey.