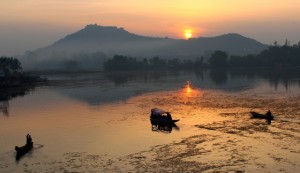 Srinagar: The nearly two-month long dry spell was broken across the Kashmir Valley as rains lashed most of its parts Saturday morning bringing cheer to thousands of farmers.

“Moderate rainfall is expected to occur throughout the valley today (Saturday) and tomorrow (Sunday), which will break the long dry spell here,” Sonam Lotus, director of the local weather office, told IANS.

“The maximum temperature, which was 33 degrees Celsius yesterday (Friday), is expected to come down to around 25 to 28 degrees today (Saturday),” he said.

“The absence of normal rains in the month of July had resulted in a dry spell. The present rainfall activity is due to the monsoon current,” Lotus added.

The rains have come as a great relief for thousands of school children and farmers in the valley.

Schools reopened here on Thursday after a short summer break, but parents have been complaining about serious hardships to children in schools and colleges because educational institutions in the valley lack fans, have cramped classrooms and poor ventilation.

Farmers, especially in north Kashmir districts of Kupwara and Baramulla, have heaved a sigh of relief after Saturday’s rainfall.

“Our paddy fields had nearly started scorching because of insufficient irrigation. Even water taps in many areas had gone dry for the last fortnight. Now that Allah has taken pity upon us, things will definitely improve,” said 54-year-old Abdul Rashid, a village elder in Rafiabad area of Baramulla.

Special prayers seeking rains were held throughout the valley as thousands of Muslims assembled for Friday prayers at various mosques here.