Lying cramped in a small space along with many others I waited for the morning when we would start for the Shrikhand. Suddenly at around 2 a.m. lightning and thunderstorm shook the tarpaulin which was providing a shelter over our heads. The supports to tarpaulin gave way in the torrential rain and wind. Everyone was up but it was a few like us lying near the entrance who had to bear the brunt of the situation. We had entered the Fahl (shelter for shepherds) when it was dark so didn’t even know whether it was on safe grounds or not? And the fear that we may not tumble down the deep gorges made me afraid. But fortunately the storm was over in some time. It was extremely cold and we were shivering. I thought that we should start walking to Shrikhand now instead of waiting for the morning but as we had no idea about what way to take, it was safe waiting for others to lead us.

I had very little sleep when there was commotion around me and I found everyone up and about. I, too, got up and put on my shoes and was ready to walk. Outside I was mesmerized by the snow around us. A nallah nearby was where pilgrims take a bath in the icy cold water before advent of the final lap to Shrikhand. I didn’t even go near that. I prayed to God to forgive me. We were told that someone from the Fahl would escort us to Shrikhand as the tradition is that a shepherd prepared halwa as Prasad in the morning and takes that to ShrikhandMahadev every morning. We were ready to move. 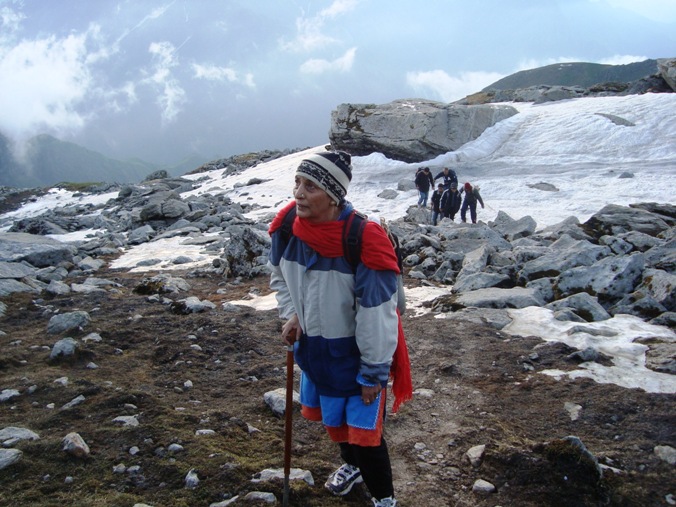 We started the ascent. Now on there was steep ascent on glaciers. The sole of my shoes was worn out and I was afraid of slipping on the glaciers. I had put my DSLR camera in the back bag and small cybershot in the pocket of my jacket. I suddenly remembered that since 2 p.m. the previous day, none of us had taken a single picture. We were so focused on walking safely that taking pictures was not even in our mind! But today I wanted to take some pictures. 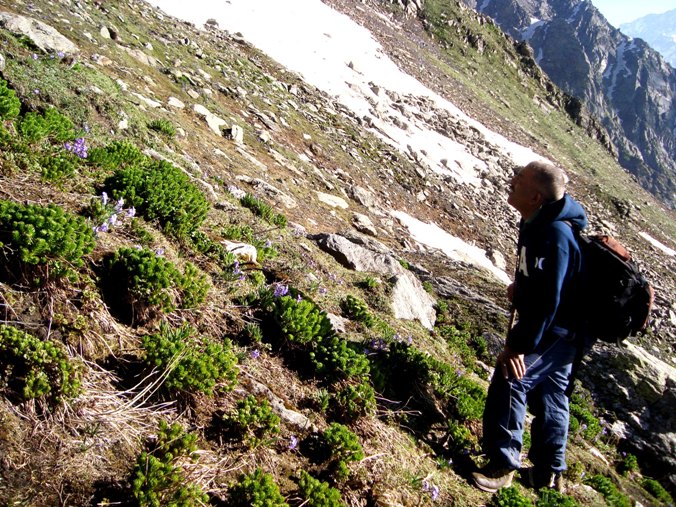 We walked slowly as now the altitude had become quite high and walking had become difficult. There was snow all around and in between there were some patches of rocky boulders and some patches of very green velvety covering on the slopes. Such diversity of nature was a treat to our eyes. 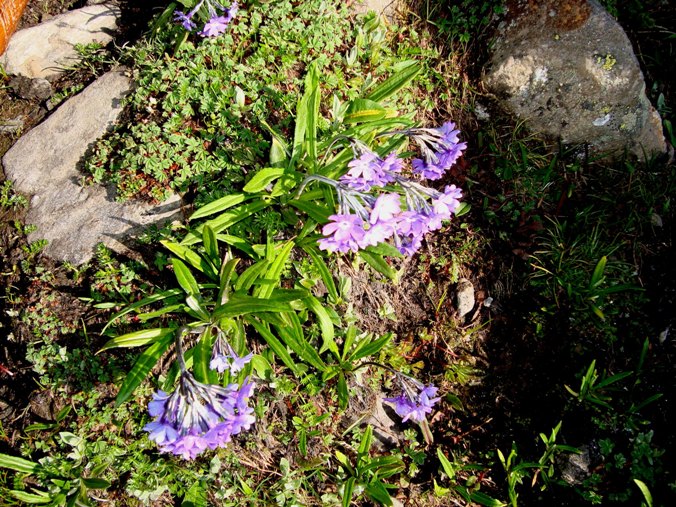 The plants were unique and the grass so green. In between some small pebbles would shine among the black soil. I would stoop down to hold shining stones in my hands and would put them in my pockets. But later on when I would be weighed down by this small weight, I would drop them on the slope regretfully. But there are a few that I carried throughout and they are a precious remembrance of the day we walk to Shrikhand!

Some glaciers were small and could be crossed easily but others were very steep and very wide. A look downwards would bring us face to face with sure and imminent death if one might slip down to its depth and a look upwards would show the grandeur of ShrikhandMahadevbeckoning us. It was a tussle between life and death! 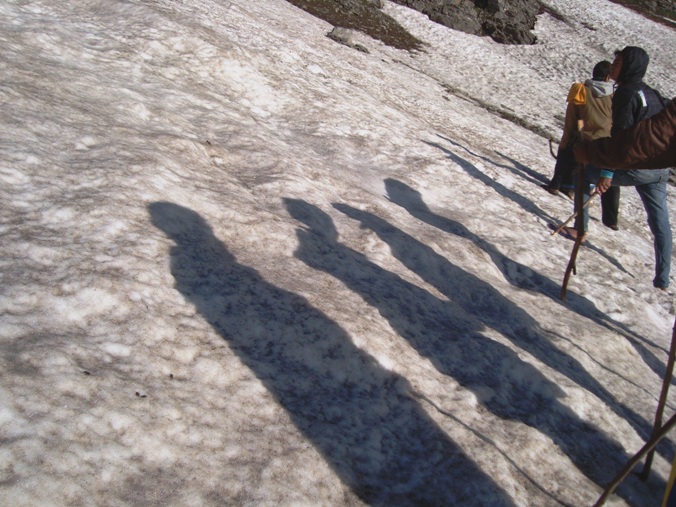 We came to a point where the glacier was very dangerous. There was no path, one had to carve one. The first one in our group would make small hole in the hard ice to act like a foothold and others would follow. We all would stand in a long queue following each other. It was at such a time that we could find how important a group is for such adventurous journeys.

By this time my brother had started lagging behind the group. He was finding it difficult to walk. I was worried but there was nothing that I could do. He had to walk and walk he must as there was no choice. He would look up at the distance up the glaciers that he had to walk and struggle towards the goal. The goal at this point in time was only to reach the point where the path from Bagipul would meet our path. I was waiting for this point as here we would meet many people who could be of some help to my brother.

At this point even walking ten steps continuously was an effort. I would sit down and then inch towards the distant goal. We had no water with us but there were small pool of water in diamond like shapes adorned by exotic plants!

The vegetation around was unique the kind of which I had never seen. At his altitude of around 18,000 ft. the flowers and grass and everything else was out of the world. I sipped a few drops of water. The taste was so different from what my taste buds were used to. I had tasted the real mineral water. There was the last glacier to cross which was very dangerous. It had dangerous slope and the path above seemed miles away. All of us were gradually inching upwards. All of us somehow reached up safely. 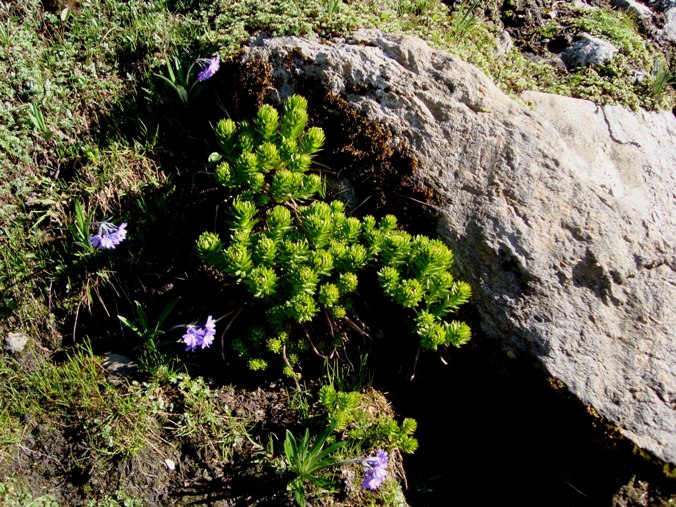 My brother was left alone. He was the last one to reach up. I cannot forget those anxious moments when I was waiting for him. He was alone with white, cold, and hard glacier surrounding him. I could do nothing to help him except waiting for him. He, too, reached. 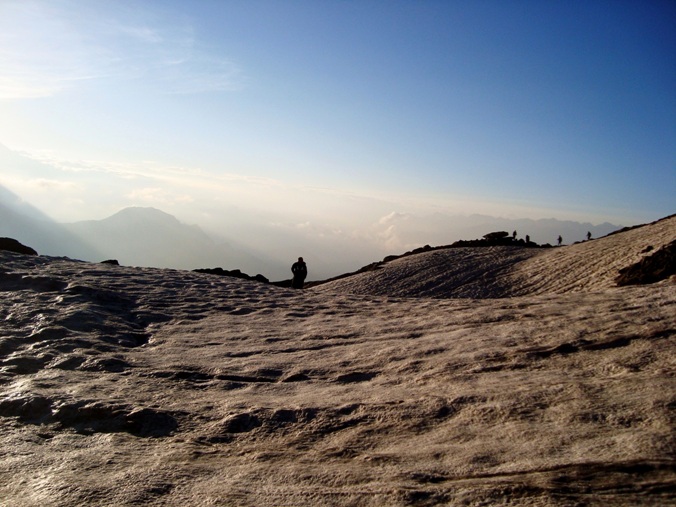 Now we had reached the point where from it was only half an hour’s trek to the Shrikhand Mahadev! There were so many pilgrims at this point. By this time we were so exhausted that walking even for the last lap seemed an ordeal. But we started the ascent. I could understand why the last lap is always the most difficult one. The big boulders and glaciers waited us. Many pilgrims were coming down and encouraging us with the words, “it is just five minutes away now!” 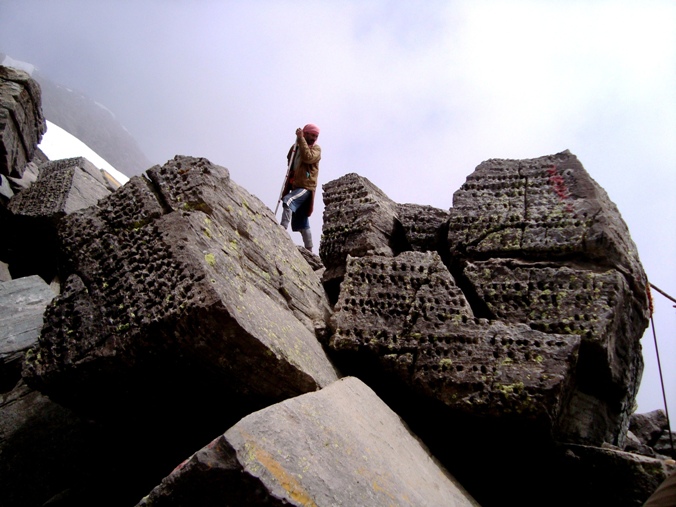 The big boulders which people call “Bhima’s stairs” lay scattered on the path. There were some big boulders that had some script on it. I wondered at this. Could it be some geographic wonder or really something that Bhima might have encrypted on stone slabs to be left for posterity! According to folk beliefs, Bhima was constructing stairs to heaven during their exile period. But Bhima broke all the stairs during the day for the fear that their presence in the area may not become known to others. 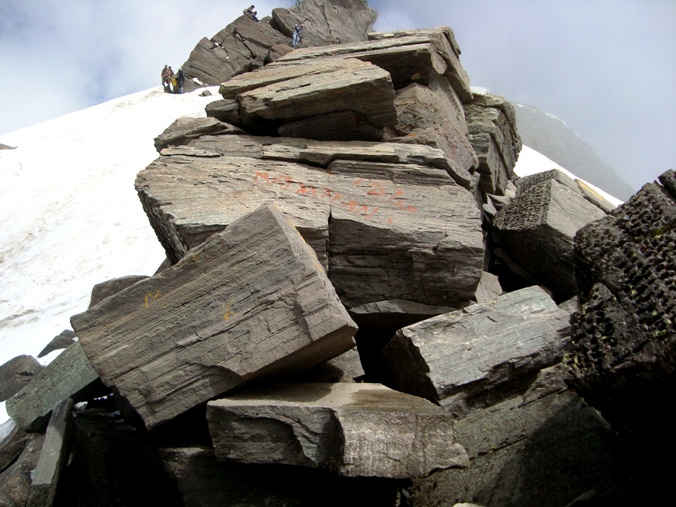 The big slabs of stone seemed well-cut as if someone had given a proper shape to big boulders. We walked along watching the wonders of a world that was enigmatic. The path was dangerously treacherous but the excitement of reaching the top was overwhelming all other emotions. 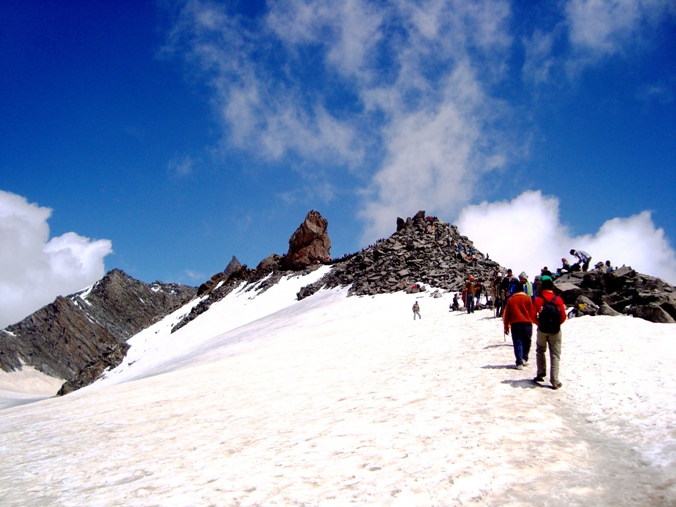 And Lo and behold, suddenly there was Shrikhanda Mahadev rising from behind the boulders. I was overtaken by the majestic beauty and grandeur of Shiva. I walked to Him. The red colored fluttering flags on Shrikhanda Mahadev, the incenses, the dhoop and flowers, red maulis and tridents before Shrikhanda Mahadev made the entire ambiance heavenly.

According to legends Lord Shiva had taken refuge inside this big 72 ft high rock when BHasmasur, the demon, ran behind Shiva to kill him. It is believed that Bhasmasur had sought a boon from Lord Shiva that if Bhasmasur would put his hand on head of any person, that person would burn to his death. Once the boon was granted by Shiva, Bhasmasur ran behind Shiva to put his hand on Shiva’s head! Lord Shiva hid inside this rock and it was only when Vishnu, in the guise of a woman, killed Bhasmasur treacherously and relieved Lord Shiva. This is the reason there is a divide in the big rock! “Khandit” means something which is broken and hence the name Shrikhand Mahadev.

But I thought that this is one place where all your pride be in wealth, position or power, is broken. This is the place where your inner pride in all that you try to become throughout your life is broken. You realize that the real strength is in dedicating oneself to His will. As all of us had passed through a stage where everything seemed meaningless and we had left our life in His hands. Ego is all forms is broken at this place. The passage to reach Him teaches you many a lessons. The only feeling left with me when I sat before Him was of a complete vacuum where I could not ask Him to bestow any worldly thing to me as I had learnt the futility of amassing all worldly things. There had come a stage where we all had felt how foolishly had we been running after power, position and paisa throughout our life when it was such a “nonentity”! 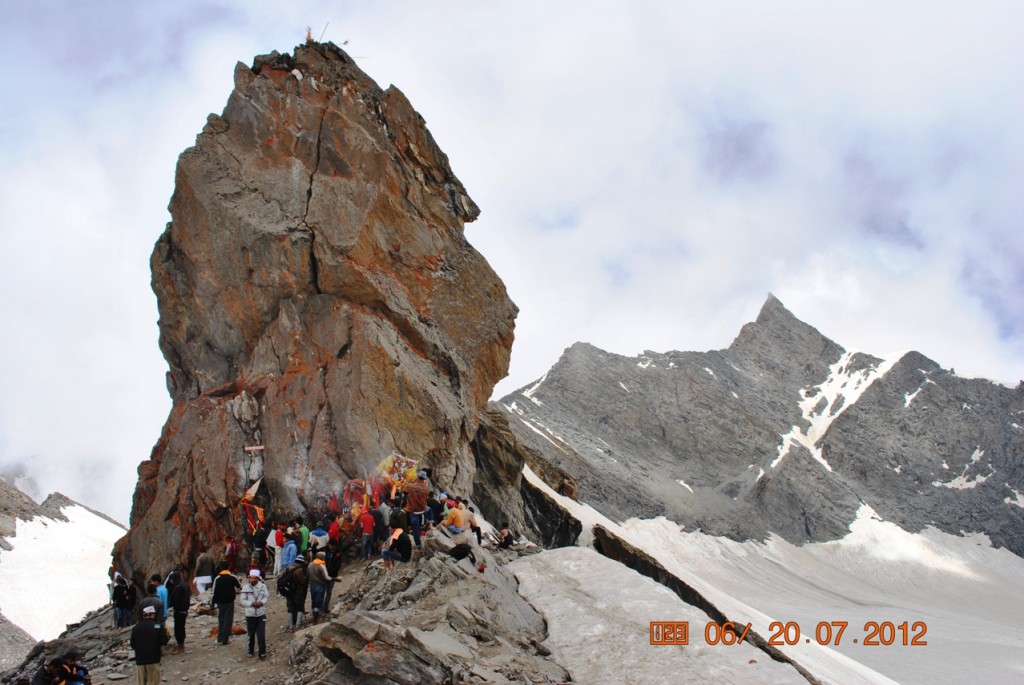 And sitting before Him, I could not seek all those worldly things anymore. I sat quietly leaving myself in His hands and care and felt blissful and at peace with myself. We paid our obeisance and captured the beauty of Shrikhanda in our soul and hearts, clicked a few pictures and returned back. I was thinking would I be able to come here again, perhaps not! We reached the foot of the mountain and decided to take the Bagipul route for our return journey. Phancha route was too dangerous for us to take and we wanted to give Bagipul route a try. If nothing else the route would be at the least full of pilgrims who could be of some help to us if needed.

And I could see that my brother needed help. He had turned white and his legs refused to carry his weight. We were worried and wanted to descend as early as possible so as to reach at safe altitude where he might get sufficient oxygen. We were worried but never panicked as it would have helped none. There was no help of any kind except divine help!

And thus started our journey to basecamp where we would stay for the night of 18 July, 2012.