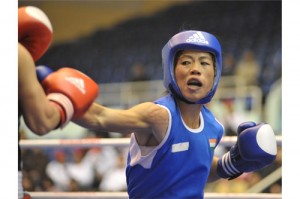 Mary Kom, however, had to settle for the bronze as she went down fighting in her 51kg semi-final bout against local favourite Nicola Adams.

The 29-year-old Manipuri also became the second Indian boxer after Vijender Singh to win an Olympic medal. Vijender got a bronze in Beijing fours years ago.

Buoyed by the presence of British Prime Minister David Cameron and star professional boxer Amir Khan, second-seed Nicola put on a flawless performance while beating the Indian 11-6 at the packed ExCel Arena.

From the start of the bout, Mary Kom struggled to cope up with the Briton’s speed. She came under pressure in the first round, having to fend off Nicola’s powerful punches.

A couple of times the 29-year-old Indian, a mother of twins, was pinned in the corner and took some major blows, losing the first round 1-3.

The second round was closer as both boxers tried to assert their dominance. However, the five-time World Champion found it difficult to get her way around her quick opponent, who narrowly edged the round 2-1.

Mary Kom, who had to switch two weight categories to get to 51kg, tried her best to reduce the deficit in the third round but had no answer to the skills of Nicola. The British fighter, who beat the Indian in the World Championships in China, also made full use of her height advantage.

The Manipuri stuck it out in the third round before losing it by a whisker.

The final round went pretty much in similar fashion as Mary Kom found it hard to cope with Nicola’s superior size. With time running out, the Indian went hell for leather but fell short and lost the round 2-3.

The Indian shared the bronze with US’s Marlen Esparza.

Esparza, 23, was defeated 8-10 in the semi-final by three-time World Champion Ren Cancan of China.

Ren and Adams clash Thursday in the final.

Women’s boxing is making its Olympic debut in London. Bouts consist of four two-minute rounds, as opposed to the three three-minute rounds for the men.

Both semi-finals losers are awarded bronze medals, with the semi-final winners battling it out for gold and silver.

Laishram Devendro Singh is the only Indian boxer left in the Olympics. He takes on Irish boxer Barnes Paddy in the quarter-finals later Wednesday.