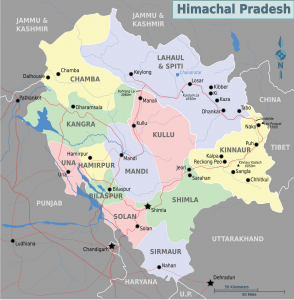 Shimla: Elections are due in December and mainstream parties like the Nationalist Congress Party (NCP) and the Trinamool Congress are queuing up to test the political waters in Himachal Pradesh.

Their aim: to oust the state’s main political parties – the ruling Bharatiya Janata Party (BJP) and the Congress. They believe the two parties are resorting to “political match-fixing” to rule the state in turn, leaving the people reeling under one corrupt regime after another.

“We are contesting the polls for the first time to play a key role in the next government formation,” said Bharatiya Janata Party (BJP) rebel leader and former speaker Radha Raman Shastri, who recently joined the NCP.

He said the party would be contesting 25 to 40 seats in the elections.

“People are tired of the Congress and the BJP and are looking for an alternative. Even some prominent BJP and Congress leaders are in touch with our party chief Sharad Pawar,” Shastri told reporters in Shimla Thursday.

Likewise, the Mamata Banerjee-led Trinamool Congress has intensified its membership campaign in all the 68 assembly constituencies.

It has come out with a 10-point programme to woo the electorate.

Trinamool leaders, who held a meeting here earlier this month, said that Himachal Pradesh was a leading hydropower state and the government should provide electricity to its residents at a nominal rate of 25 paise per unit.

It has also demanded an unemployment allowance for youth and allocation of government contracts up to Rs.2 lakh only to locals.

“We have decided to give 50 percent of the tickets to youths to increase their representation in the state politics,” Trinamool state vice president Sanjay Sharma said.

Political observers say the third front has turned into a headache for both the BJP and the Congress as their leaders are established ones and have a good experience in politics. As the elections draw closer, more leaders who will be denied tickets will join the third front, they said.

“Both the parties (NCP and Trinamool) comprise disgruntled leaders. Their only interest is to get them photographed (on banners). Once elections are over, they will be nowhere to be found,” HLP spokesperson Tikku Thakur said.

The HLP, which was floated by four-time former BJP MP Maheshwar Singh Feb 3 this year, has more than 100,000 members. It also has Shyama Sharma and Mohinder Sofat, former BJP ministers.

Undeterred by the undercurrent, Himachal Pradesh Chief Minister Prem Kumar Dhumal is firm in his view that there is no scope for the third front in the state.

“In a democratic setup, everybody has the right to float a party. Such experiments have been carried out in the state in the past with a little success,” he told IANS.

Though elections to the 68-member Himachal Pradesh assembly are due in December, they are likely to be held in November.