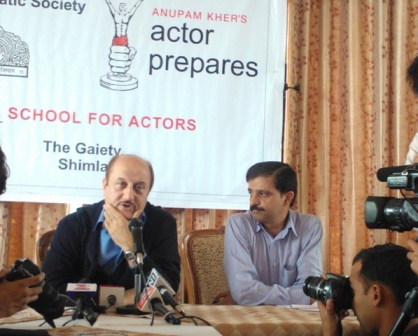 Shimla: To support and promote theater here, film personality Anupam Kher intends to hold an international theater festival by end of next year, besides drawing up plans for starting a acting school in the city.

Talking to reporters at the launch of a theater workshop, Kher said, “it was in Shimla where I learnt my first acting lessons and it was payback time now.”

Starting out by conducting theater workshops in collaboration with the cultural department and historic Gaiety Theater, the art would be taken forward and by end of next year, we would be in a position to host an international theater festival in the city, said Kher.

After having established successful theater schools in Mumbai and Cheenai, Kher said that it was a longtime desire to have a theater school in the city where he grew up.

Recalling the first lessons as a child actor in a school play, Kher regaled the fact given a role as Prithviraj Chauhan in the school play, a friend acting as Jai Chand on being instigated by his parent chose to debunk the script and from being the villain of the act who was supposed to die at the hero’s hands pushed him out to claim victory in the play. 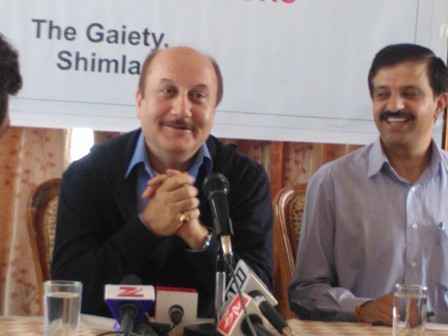 “It is time to give back to the city that gave me so much,” he said as he announced plans for setting up a theater school in the city like the ones founded in Mumbai and Chennai.

A theater workshop to be conducted by master artist Yash Raj of the Mumbai School would at the end of a four week course have a play ready that would be shown at the century old Gaiety Theater.

Kher, who was to leave by the evening for a shooting schedule of  the Hollywood film ‘Silver Lining Playbook’ in which the veteran actor has acted alongside Robert De Niro said, “another theater workshop would soon be held in Singapore and Sri Lanka.

He said that Himachal had many excellent locales for film shoots that could be an medium for promoting tourism in the state.

Speaking about re-discovering Kariyala, the folk theater of Himachal, the actor said that theater director Habib Tanwar by drawing upon the folk theater of Chattisgarh did produce the masterpiece Charan Das Chor that went onto acclaim international recognition.

Coming back to the town after two months, Kher said, ‘I do miss my father a lot in a city that he had adopted and I grew up in.”

The last time the actor visited the city, he had come to immerse the ashes of his father Pushkarnath at Tatapani as part of the last rite rituals.

In all there are 40 actors aged between 8 to 66 years old who have enrolled for the four week workshop conducted for a fee of Rs 5000/- per head.

In all there were 500 inquiries for the four week acting workshop in Shimla that got underway today.

In memory of his father, the actor has announced a yearly Rs 1 lakh award for the best actor of the state.