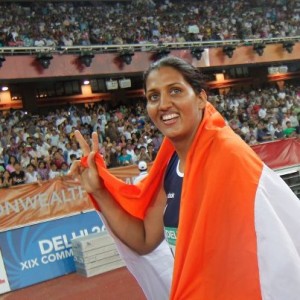 London: Indian discus thrower Krishna Poonia finished a creditable seventh in the women’s discus throw while the gold medal was won by Sandra Perkovic of Croatia in the 2012 London Games at the Olympic Stadium here Saturday.

Sandra took the gold with throw of 69.11 metres, a national record, while the silver medal was taken by Darya Pishchalnikova of Russia with 67.56 m and Li Yanfeng of China settled for the bronze medal at 67.22m.

Poonia’s best effort of 63.62 m came in her fifth and penultimate attempt. The Commonwealth Games gold medallist had 62.42 m in the first attempt and 61.61 in the third and 61.31 in the sixth and the final throw. She had two no-throws in the second and the fourth attempt.

Poonia’s efforts here were nowhere near her personal best of 64.76 m that she achieved three months back in Hawaii.