With hours taking up to fill fuel, the rare-in-sight Compressed Natural Gas stations seem to be the perfect gathering for frustrated Auto-Rickshaw Drivers.

The rain gods are yet to be pleased as it is a typical hot and humid afternoon at the Shivaji Nagar CNG station in Pune. A horde of rickshaw drivers systematically organize themselves in queues in order to fill up the precious CNG fuel.

A handful of barricades lie around the station to aid the rickshaws and regulate the traffic at the ever-crowded CNG pump. In addition to that, pair of security guards mans the Pumps, merely to facilitate a fair disposal of the gas. But with all the arrangements in place, does the traffic really move?

A few candid hours at the Shivaji Nagar Pump, one of the five rare species in Pune to distribute the CNG fuel and it is tough to spot if the three wheelers have actually moved closer to the pump stations. With only two pipes and an approx. 2000sq foot space, the line at the pump never seems to end.

It’s hard to miss Imran Sheikh’s acerbic criticism over the CNG fuss as he pulls his rickshaw for a refill.

“The entire perception that the Government has created about CNG being cheaper and economical is flawed. Due to the scarcity of enough CNG pumps, our journey to the Pumps itself cost us a lot. Moreover, we have to waste over three hours standing in queues during our peak hours resulting in the heavy loss for business.”, said Imran.

Born and brought up in Pune, the 28 year old has been driving the Auto Rickshaw since 3 years. A frown Imran rues the investment that he made in buying the three-wheeler.

The Supreme Court’s ruling in 1998 to implement CNG fuel for all autos hasn’t gone down well with the auto rickshaw drivers. With only a handful pumps to facilitate the gas supply, the drivers have to brave the harsh weathers as they pull their Auto Rickshaws to trudge along the snail paced line.

Getting a CNG connection is not as cheap and economical as the Congress conveniently put it in its reforms. Says 50 year old Srinivas who has been driving the rickshaw for over 25 years by now, 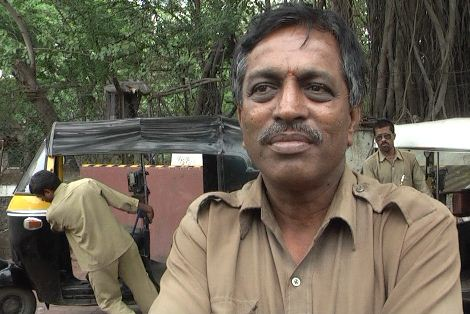 “The battery for the vehicle itself cost me Rs.6,500. I had to invest another Rs.2,500 for the new meter and wiring. A CNG vehicle, on average gives a mileage of about 20 kms depending upon the durability of the vehicle. People only see that CNG is cheaper than Petrol and hence we are making profit!”

Srinivas dares the authorities to ply auto-rickshaws for a day to understand their plight. His shirt clings onto his body due to sweat as he speaks, evident of the struggle that the auto-rickshaw drivers face everyday.

The spineless attention, given to the grim issues faced by auto walahs every day is quite appalling, considering the fact that most of the population in the cities depends on the rickshaws for their means of transport.

While it is easy for the Government authorities to sit and blame the drivers for holding ‘senseless strikes’ for ‘unnecessary demands’, it should also not be a hard task for them to pay little consideration to their woes and take active measures to address them.