Kolkata: Away from the glitz and glamour of celebrations to hail the heroes of India’s most successful Olympic Games are the unsung non-governmental agencies that played a significant role in the athletes’ accomplishments.

Small bands of former internationals and corporate houses quietly worked to see the Indian athletes fulfilling their dreams of becoming world beaters at the London Games.

Prominent among the agencies are the Olympic Gold Quest (OGQ), the brainchild of sporting legends Geet Sethi and Prakash Padukone, and Mittal Champions Trust (MCT), an initiative by steel baron Lakshmi Niwas Mittal, which has on its board tennis stars Mahesh Bhupathi and Manisha Malhotra.

Seeing the Mittals, other corporate houses have also started looking beyond cricket. They are now viewing the Olympic disciplines more favorably.

The Mittals have earmarked over Rs.50 crore to prepare the prospective medal winners at the 2016 Olympics in Rio, while the Sahara Group has an ambitious plan to create an ultra-modern sports complex at the sylvan surroundings in Amby Valley near Pune, with facilities for boxing, wrestling, shooting and archery.

From spotting potential talent to providing them with the means to improve their performance, both OGQ and the MCT have been helping Indian athletes achieve the ultimate sporting glory – an Olympic gold medal.

That five of the six London medalists are part of either the OGQ or the MCT, shows the two organizations have succeeded in their effort to help athletes excel. If the MCT has grappler Yogeshwar Dutt as a medal winner, then the OGQ has shuttler Saina Nehwal, shooters Vijay Kumar and Gagan Narang, and boxer M.C. Mary Kom, who all had podium finish last month. 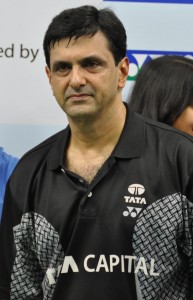 “Our focus was on three key aspects – selecting the best talent, monitoring their growth, and finally funds their requirements. Selecting the right athletes is the essence of our venture and we choose them in a scientific way after a thorough research,” Padukone said

The MCT has 38 athletes on its roster while the OGQ has 32 from various Olympics disciplines.

Founded in 2001, the OGQ has experts, who systematically monitor the progress of athletes and provide them the best coaching and scientific training facilities. Their nutrition and diet are also taken care of.

“Different players have different requirements and they themselves know what they need. We just provide the funds so that they can avail the best of the facilities without any red tape,” said Padukone, adding that the OGQ has spent nearly Rs.8 crore so far on the athletes.

OGQ – backed among others by Bajaj Group, one of whose directors Neeraj Bajaj is a former table tennis international – will raise Rs.7 crore every year for the next four years. It is also looking ahead to train athletes in their early teens keeping 2020 as goal.

Acknowledging the contribution of MCT and OGQ, sports minister Ajay Maken has made a public appeal to major business houses to join hands with the government in raising the standards of sport in the country.

Both OGQ and MCT send sportspersons overseas for training and hire foreign coaches and trainers and also provide them world class equipment. They also make sure the athletes get the right kind of international exposure to reach the “next level” of their performance.

“Our mission is to harness India’s sporting talent and create an empowering environment for athletes with the support and guidance required to get on to the Olympic podium,” MCT chief executive officer (CEO) Manisha Malhotra said.

With “Talent is born, Champions are bred” as its motto, the MCT was born at the 2004 Athens Olympics.

The London Games may surely have finished but for the OGQ and MCT, the journey goes on.

The sportspersons, who have been receiving monetary benefit from the MCT or the OGQ are determined to show their gratitude with medal-winning performances.

“I am very thankful to the MCT for all its support. I owe my success to it. From world class training facilities to getting the latest equipment, they did everything for me,” said shooter Joydeep Karmakar, who narrowly missed a bronze medal in London.

While the country is celebrating its best ever Olympics medal haul, both the MCT and OGQ are unwilling to take the credit.

“The credit for the success at the Games this year goes to the athletes and the government which has spent huge sums of money to put in adequate infrastructure. We have played just a small supportive role,” former hockey star and OGQ CEO Viren Rasquinha said.