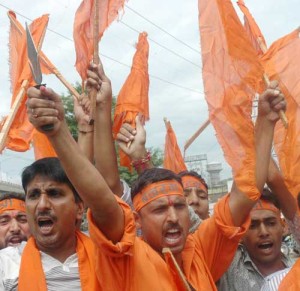 Guwahati: Normal life was affected in most districts in Assam Monday due to the 12-hour dawn-to-dusk shutdown called by the Bajrang Dal in protest against the recent violent incidents in the state.

There were, however, no untoward incident reported from anywhere in the state so far. In Guwahati and other places, Bajrang Dal activists burnt tyres to stop movement of vehicular traffic. The shutdown was supported by Vishwa Hindu Parishad (VHP) and Rashtriya Swayamsevak Sangh (RSS).

Police had also detained many people for pelting stones at various places across the state.

Most of the schools, colleges, business establishments remained closed throughout the state during the bandh (shutdown) hours and commercial vehicles remained off the road during the day.

At many places, the government offices too recorded thin attendances.

The shutdown, however, failed to impact movement of trains and flights in the state, official sources said. A Northeast Frontier Railway spokesman said that all the trains were running as per schedule.

Meanwhile, the United Movement for Peoples’ Rights — a conglomeration of 12 organization of non-Bodo communities and organizations of religious minority people — has also called for a 12-hour Assam bandh Tuesday to protest against the failure of the state government to check alleged atrocities on non-Bodos and other minority communities in Bodoland Territorial Areas Districts (BTAD).

The three districts of western Assam – Kokrajhar, Chirang and Dhubri – have since July 19 witnessed violent clashes between the Bodos and Bengali-speaking Muslim settlers, which claimed 86 lives till Sunday.

The violence has displaced over 400,000 people – the majority of whom are still living in relief camps in the three districts.