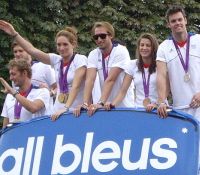 Paris: French steeplechase runner Nour-Eddine Gezzar will have to serve a 10-year ban after a second doping offence, the French Athletics Federation said.

The 32-year-old was denied a chance to show up in London Olympics after he tested positive for the banned blood-booster EPO during the French Championships in Angers in June, reports Xinhua.

He had previously been banned for two years in 2006 after testing positive for anabolic steroids nandrolone and finasteride, both banned diuretics.

Gezzar appealed to the Court of Arbitration for Sport (CAS), which dismissed his case earlier this month.