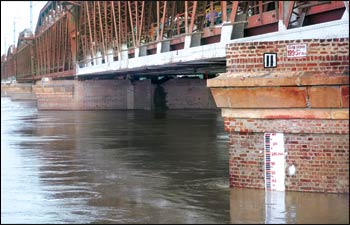 New Delhi:It was a rained-out morning in the capital Wednesday with the season’s heaviest showers resulting in several areas being waterlogged and the inevitable traffic snarls that snagged office-goers.

“This is the season’s heaviest rainfall. There is the possibility of heavy rain with thundershowers in some areas,” said an official of the India Meteorological Department (IMD).

“Maximum temperature would stay around 30 degrees Celsius,” the official said.

The total rainfall recorded till 8.30 a.m was 59.9 mm. The minimum temperature settled at 23.6 degrees Celsius, a notch below the average.

“The cyclonic development over the National Capital Region triggered incessant rains with dense clouds. This would continue for two days after which it will head towards Uttar Pradesh, Nepal,” the official explained.

The monsoon would last till Sep 20, he added.

The Yamuna also inched closer to the danger mark.

“The Yamuna level is 0.15 metre below the danger level of 204.83 metres,” said an official from the flood and irrigation department.

Early morning showers Wednesday led to chaos in the city with people having to wade through knee-deep water in several areas, water seeping into basements and traffic jams on key roads.

The traffic department had started issuing alerts on social networking sites and its website asking people to avoid rain-affected routes.

Traffic officials said there were reports of snarls from nearly all parts of the city.