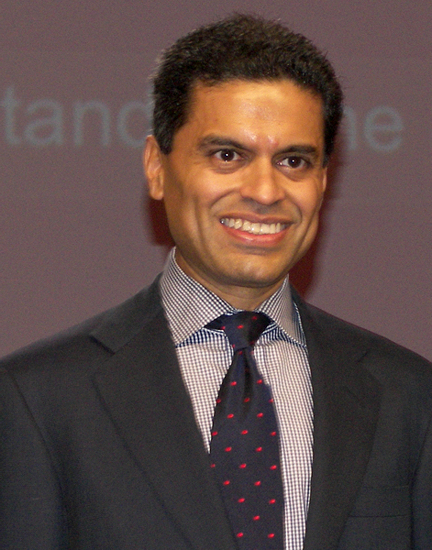 Washington: Celebrated Indian American journalist Fareed Zakaria, who was suspended by Time and CNN last week after he apologised for plagiarizing a paragraph from the New Yorker for his Time column, will keep both his jobs.

Time magazine and CNN, both owned by Time Warner, announced Thursday that after a review of his work they were revoking the temporary suspensions of Mumbai born Zakaria, 48, who became editor-at-large of Time in 2010 and hosts CNN’s flagship foreign affairs show “GPS”.

“We have completed a thorough review of each of Fareed Zakaria’s columns for Time and we are entirely satisfied that the language in question in his recent column was an unintentional error and an isolated incident for which he has apologized,” Time’s statement read.

“We look forward to having Fareed’s thoughtful and important voice back in the magazine with his next column in the issue that comes out on Sep 7.”

In a statement released a few hours later, CNN said: “CNN has completed its internal review of Fareed Zakaria’s work for CNN, including a look back at his Sunday programs, documentaries, and CNN.com blogs. The process was rigorous. We found nothing that merited continuing the suspension.”

“Zakaria has apologized for a journalistic lapse,” it added. “CNN and Zakaria will work together to strengthen further the procedures for his show and blog.”

In another piece of good news for Zakaria, the Washington Post apologized to him Thursday for stating in an article that in his 2008 book “The Post-American World,” Zakaria had failed to cite the source of a quotation taken from another book.

“In fact, Zakaria did credit the other work, by Clyde V. Prestowitz. Endnotes crediting Prestowitz were contained in hardcover and paperback editions of Zakaria’s book. The Post should have examined copies of the books and should not have published the article,” the daily said.

“We regret the error and apologize to Mr. Zakaria,” the Post wrote.