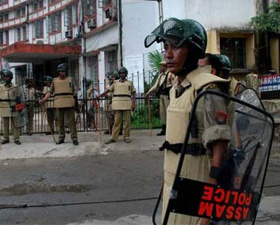 Guwahati: Five people were found killed in communal violence-hit Chirang district in Assam’s Bodo areas, police said. The victims were yet to be identified.

Police said that the bodies were recovered from a paddy field in Choudhuripara near Mangolian Bazar in the district.

Inspector General of Police (Bodoland Territorial Areas District) S.N. Singh said that the bodies were recovered after local residents informed police. The deceased were yet to be identified, he said.

“Suspected miscreants must have killed the five people during the day and hidden their bodies in a paddy field in the area,” he said.

Communal violence erupted between the dominant Bodos and Bengali-speaking Muslim settlers in Assam on July 19 at Kokrajhar district. The violence soon spread to contiguous Chirang and Dhubri districts killing close to 80 people and displaced over four lakh people in the three districts.

Although no fresh incidents of violence took place in the three districts, night curfew was in force in Chirang and Dhubri districts.

The Kokrajhar district administration, however, imposed indefinite curfew in Kokrajhar district Thursday after police arrested Pradeep Brahma, a legislator of the Bodoland Peoples’ Front (BPF), for his alleged involvement in the violence.