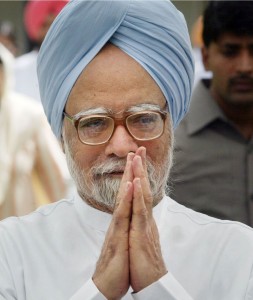 New Delhi: The Congress Saturday expressed hope that the BJP will allow parliament to function Monday and indicated that Prime Minister Manmohan Singh may address the nation on the issue of alleged coal scam if the proceedings of the two houses were disrupted again.

“It is completely misrepresenting the CAG report,” Dikshit told IANS.

The Comptroller and Auditor General (CAG) in a report to parliament last week said that lack of transparency in allocation of coal blocks to private players resulted in a notional loss of Rs.1.85 lakh crore ($37 billion) to the exchequer.

Dikshit said the BJP was not allowing the prime minister to speak on charges concerning the CAG report.

Asked if the prime minister could address the nation if the BJP continued to disrupt proceedings Monday, Dikshit said Finance Minister P. Chidambaram spoke about the possibility of the UPA government finding a way out.

Dikshit, however, added he did not know what decision the government will take.

Chidambaram told media persons Friday that if the prime minister is not allowed to speak in the house Monday, the government will have to find a way for him to speak to the country. The Prime Minister is scheduled to leave for Iran Tuesday on a three-day official visit to attend the Non Aligned Movement summit Aug 30-31.

Congress sources said Speaker Meira Kumar had called a meeting of political parties Monday to find a way out of impasse in parliament over the BJP’s demand for the prime minister’s resignation and successive disruption of parliament last week.