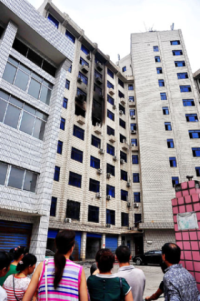 Shanghai: Three people were killed and four injured when a woman who was angry with her former water company for not giving her son a job hurled a petrol bomb in a meeting room in China’s Hunan province, a media report said.

Shi Yanfei, who had retired from the Shaoyang Water Company in Shaoyang, Hunan province, entered the meeting room Monday and threw a bottle filled with petrol at officials.

Three people were killed and Shi, who was injured in the fire, jumped off from the sixth floor in a suicide attempt, reported Shanghai Daily citing China News Service reported.

She later died in hospital.

An investigation found that Shi was upset at the water supply company’s decision not to recruit her second son although her older son had got a job in the company.

Shi had taken early retirement – a policy in state-owned enterprises that helps make room for younger people – and there was speculation the company might have made an offer to give both her sons a job in lieu of paying a sum of money in compensation.

The probe found that she became angry on hearing that someone else had been given the job that she believed should have gone to her younger son.