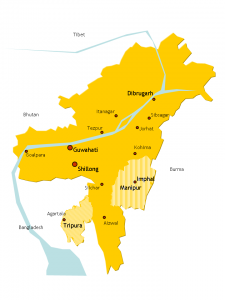 New Delhi: The ethnic violence in Assam which led to an exodus of thousands of northeastern people from other parts of India was not a Hindu-Muslim clash, a central minister from the region has said.

But it did betray a trust deficit among people living in Bodo tribal areas, said Paban Singh Ghatowar, the Minister of State (independent charge) for Development of the Northeastern Region.

“The ethnic violence in Kokrajhar is not a clash between Hindus and Muslims but (showed) a trust deficit among the people,” the minister told  in an interviw.

Over 400,000 people were uprooted and over 75 killed in the terrible violence between tribal Bodos and Bengali-speaking Muslims which broke out in Kokrajhar in July and spread to other areas.

The clashes led to the most unexpected exodus of northeastern people from Bangalore, Pune and Chennai after anonymous messages vowed to avenge the killing of Muslims in Assam.

Ghatowar agreed the recent clashes were related to disputes over land rights. “Land is an issue there,” he said.

He clarified that no outsider can buy land in the areas under the Bodoland Territorial Council (BTC) area, but those who already have land rights can do so.

The Bodos, the largest of 34 tribal groups in Assam, have been fighting for autonomy since the 1960s.

A militant Bodo movement peaked in the 1980s and 1990s. Peace was established after the BTC was formed in 2003, covering the four districts of Kokrajhar, Baska, Udalguri and Chirang.

But more than 200,000 still remained in the shelter homes, apprehensive about their security.

“We hope their confidence will return,” Ghatowar told IANS.

The minister said the Assam government had taken steps to inject a sense of security in the violence-hit areas including Kokrajhar, Chirang and Dhubri.

Besides, the army remained on standby to meet any eventuality, he said.

Terming the violence as a human tragedy, the minister urged all political parties to come together to restore normalcy.

“The prime minister has announced Rs.300 crore for the development of the region. More money will be given if needed,” said Ghatowar, a Congress member of the Lok Sabha from Dibrugarh in Assam.