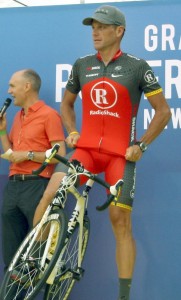 Washington: Seven-time Tour de France winner Lance Armstrong has decided not to contest the US Anti-Doping Agency’s charge that he used performance-enhancing drugs, a decision that has cost him all his titles and prize money he has won since 1998..

Armstrong, who turns 41 next month, gave up the battle he has fought for over a decade the charge that he has used performance-enhancing drugs to excel.

Armstrong stated he would not like to contest the charge levelled against him by the United States Anti-Doping Agency (USADA) any longer.

The USADA has even charged that Armstrong was one of the ring-leaders of systematic doping during his reign at the Tour. He has, however, vehemently denied the charge dubbing it “an unconstitutional witch-hunt” and “one-sided and unfair.”

“There comes a point in every man’s life when he has to say, ‘Enough is enough,'” Armstrong said in the statement.

He also said the reason for not contesting the charge is that it had taken too much of a toll on his family and his cancer foundation work saying that he is “finished with this nonsense.”

His decision, in the eyes of the World Anti-Doping Code, has stripped him of his seven Tour titles, the 2000 Sydney Olympics bronze and all other titles, awards and money he won from Aug 1998.

Armstrong will also be banned for life from competing, coaching or having any official role with any Olympic or other sport that follows the World Anti-Doping Code.