Families of friends, living in the same mohalla on the fringes of Delhi, and facing regular black outs during summer, enact after a mid night meeting, when the men unable to sleep, gather for a smoke and some shugal, under a drooping Peepul tree:

“Canteen ki rum thok ke aareya hai” teased Patla, lighting another cigarette himself. “Be-bijli garmin ko kos rahe the” continued Patla as he forced out a downward jet of smoke from one nostril.

The men were silent, quickly calculating the size of the monetary hit they would have to take.

Just then the leaves of the Peepul rustled ever so little and the breeze was felt by the men below.

The families along with half a dozen kids and toddlers, Lucky, Simple, Billa, Titoo, Bhola and Kushboo are packed in two Tata Sumo taxis chugging up the hill towards Kufri, the high point above Shimla. Kushboo, the toddler is squirming in her mother’s lap and letting out muffled cries every now and then.

The other men laughed and the ladies giggled, except Mrs Meta-Shramik. 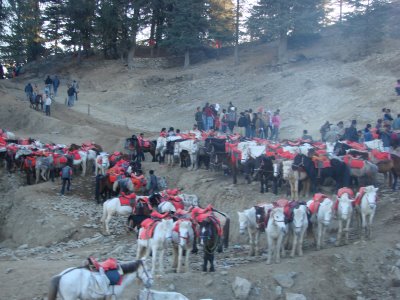 The women hastily pulled their hankies or pallus over their nostrils as the stench of pony shit hit their open car like a malodorous tsunami.  Soon the kids were on ponies and the parents following to get to Mahasu dhar the top of Kufri.

Mrs Patla (who was quite heavy, after walking a while):  Uff, Uff!  Yeh to bahut chadhaee hai.

The men had made it to the top and were clicking photographs of their kids on ponies and of themselves. The pony wallahs were getting impatient to return. The ponies snacked at the grass. The pony wallahs after much haggling, left, murmuring all the way down. The kids pleaded for kulfi sticks being peddled by vendors nearby.

It was late afternoon by the time the group wobbled back to the waiting taxis. Billa while running down hill tripped and bruised his knees. He was crying silently as the other kids consoled him. Jagadish’s knees were hurting. Mrs Meta-Shramik, with her ‘ghutne ki nas’ used Mr Meta-Shramik as a crutch to get down while the other men sadistically let out suppressed giggles.

The others nodded in agreement.

Presently, the taxis stopped at a restaurant in Kufri. After much pushing and pulling and coaxing the kids (who wanted sit near the window), the group was finally seated for a late lunch, hungry.

Others: Kya? To phir hai kya?

So dosas and uttapams were ordered as per choice. Everybody ate in silence. The kids made faces at the fare and waited anxiously for news about the ice cream.

The kids wailed out loudly.  Jai Jawan put his hand to his mouth suppressing a laugh. Jagadish assured the kids he would buy them ice cream in Shimla.

Jawan: Uncle, how about a drink for the big kids?

On the way to Kalka to catch the train to Delhi, the group joked and laughed at each other’s plight going uphill and downhill in Kufri.

At the back, Jai Jawan still high on beer, was humming to himself: