Since the time I’ve heard about them, I’ve always wondered, what’s honor got to do with all the murders, heinous offenses and atrocities that happen in the name of it? Family honor, prestige, dignity – are all big words in the society we live in today. I could understand the importance these words had in a time and age really different from now, like a good twenty to thirty years ago, but seeing so many horrifying things leading back to these words, even today, I’m really amazed, not to mention angry! Where’s the honor in killing your own daughter or sister or a cousin (anyone, if you ask me), just because she happened to fall in love with a guy you didn’t approve of, or because he belonged to a different caste or religion? Did murdering her, bring back the family prestige, salvaged the precious family name? Was it worth the blood on your hands? Was it worth her life? Apparently and unfortunately, these questions will get many affirmative replies.

Going through the newspapers, I’ve noticed that every other day a news article or so on a recent honor killing in one state or another has become a must. There’s been a surge recently in the number of crimes committed in the name of honor in our country. According to the United Nations Population Fund, about 5000 deaths take place each year due to honor killings around the globe, and more than 1000 of them have been reported from India (mostly from Northern regions like Punjab, Haryana, Rajasthan, Uttar Pradesh and then Bihar in the East)  for the past 3-4 years. Instead of moving forward, it seems as if people here are determined and satisfied to just stay stagnant without even bothering to consider a different point of view, one which has its roots in moving away from a patriarchal way of existing in a society.

The main reason these heinous acts are still continuing is the really rigid caste system that still exists in many states of India. Usually, in rural places it is considered a crime to marry someone from the same gotra (clan) or a different (or supposedly lower) cast, a crime so serious that can only be awarded the capital sentence without any trial, for it brings shame to the family name. The laws set up by the Indian Government to prevent such acts (of murder, assault or forced marriages) have had little or no impact in these regions because they never have arrived there; they’re not even recognized as something to abide by! The Khap Panchayat (or khap), a caste-based council of Jatts, in Nothern regions of the country, believes in giving Taliban style diktats, moral policing, handing out harsh, cruel and ridiculous sentences by taking the law in their own hands. Even when the Centre has passed a law saying it does not recognize the khap or any laws laid by it as legal, there have been many occasions when the khap has ordered couples to be hunted down and murdered.

The one which caused the most furor among people, was the Manoj-Babli case in which the two newlyweds were killed in the name of honor, ordered by the khap in Haryana in 2007. These khaps are assisted by the family members of the victims time and again, and many times even by the cops to which these couples go for help and protection. What’s worse is that they remain unapologetic about this.

It would be a mistake to assume that crimes like these only happen in the rural areas. Though affecting rural areas on a larger scale, these acts are present in many urban areas and metropolitan cities too.

The recent case of a 26 year old school teacher, Deepti Chikara, in Delhi who was strangled to death by her brother, as her uncle and mother pinned her down, because she had just walked out on a marriage of 5 months and wanted to marry a man from a lower caste, reflects how even in big cities people are trapped in the dark ages!

The patriarchal or male dominant society is also to blame for these acts to some extent. Usually, in honor killings, it’s the female member of the family who is attacked. Any reason that brought disrepute to the family, be it, a divorce, refusal to an arranged marriage or seeking a life partner in someone who is considered to be from an inappropriate group/caste in society, dressing in western clothes, a premarital or extramarital relationship, or even being the victim of a sexual assault, is seen as enough motive to be done away with the woman/girl. 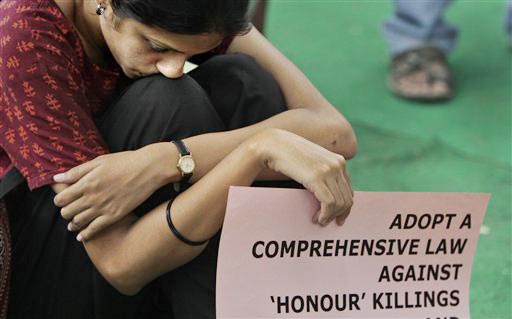 The main problem, I guess, lies in the lack of any strict laws against perpetrators of these barbaric acts. Instead of meshing it together with all other laws under the Indian Penal Code (IPC), there’s a need for a standalone law against honor killings, and the Government has been planning on that since ages! Really do things like this need such a long time?! (I thought Amir Khan raising this subject in his show, ‘Satyamev Jayte’, might have helped in speeding up this process, but I don’t see anything happening till now!)

There are so many questions these hate crimes raise. How come till now, there’s such a big chasm between people with beliefs in the traditional way of life and people leading a life with modern views? There are so many ugly truths hidden all over the country, some hidden, some proudly talked about as if they’re blessings. There’s so much violence, so much hatred and narrow mindedness existing in our country which lead to a lot of suffering, most of which is endured by the innocent or those who dare to step out of the confines of a society so lost in its age-old, rusty customs and traditions. What’s wrong with us? Why is it that we are not able to understand a thing so simple? Where does this intolerance come from and why hasn’t it been, if not completely, uprooted at least a little? The mentality of the people has to change, they have to be able to see logic and broaden their thinking. What’s wrong about your daughter or son coming up to you to say that they have chosen their life partner? After all, aren’t they the ones who have to spend the rest of their lives with that person? What’s wrong with them wanting the freedom to wear the types of clothes they want to? What’s wrong with them making their own mistakes and learning from them? What’s wrong with them taking their own decisions? What’s wrong with wanting to be independent? Isn’t freedom everyone’s birth right, or so says our constitution?

Stop caring about your ‘false’ family name, and start caring about your family. How can you love your family honor more than your own daughter or son? Give them the freedom they deserve and stop this moral preaching! It’s no one’s business what you dress like, what and how you eat or drink, who you date or marry, or divorce for that matter! Another Independence Day is gone and then will be another on its way. Honor comes with freedom of the mind. Why can’t we, at least now, just stop being slaves to the past, and start understanding what independence really means?!

” ‘Tis nobler to lose honor to save the lives of men than it is to gain honor by taking them.”

Writer is an engineering student at BIT, Durg.