New Delhi: Raja Kumar, 13, hadn’t dreamt he would ever go to school. He lived on Delhi’s streets, rummaging through garbage for a living and playing with other street kids. Today the boy has got admission in a government school – thanks to a mobile learning centre.

Kumar, a resident of a slum in Okhla area here, received basic elementary education at the mobile centre launched last month by Save the Children to educate street and slum children.

“My father is the only earning member. In a family of five siblings, we just survive. I have to do my bit to support my family,” Kumar told IANS at the New Sanjay Camp near Okhla in south Delhi.

“I was lucky to get a chance to study… I don’t think I ever could have.

“I am getting a sense of direction towards further studies and employment,” Kumar added. His gleaming eyes now carry the hope of a better and secured life.

Like him other children from similar background are looking towards a better future by joining this mobile learning centre.

Housed in a gleaming, swanky yellow bus, the learning centre is bridging the gap between streets and schools for children usually found ragpicking or begging. It equips children with preparatory and elementary education.

The school may be on wheels but everything in the classroom is conventional– roll call, attendance register and teachers.

To keep the children hooked to studies, the bus is equipped with graphical story books, LCD television, cushioned couches and wooden cupboards.

Over the last two weeks, the centre has seen an increase in attendance — from 38 to 53 children. 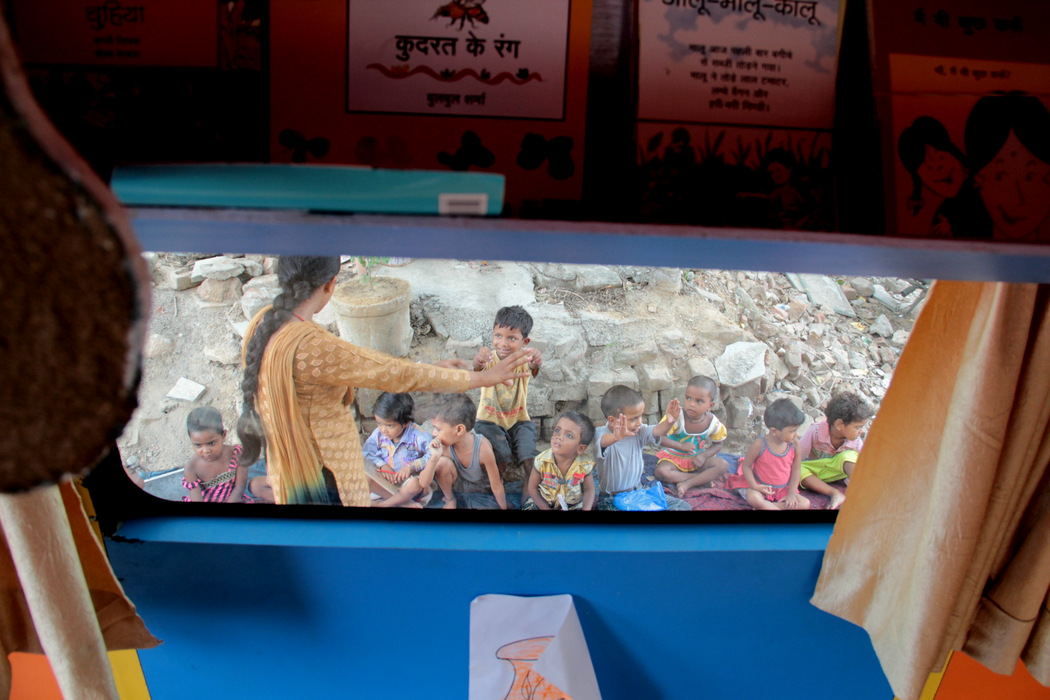 Keeping their economic compulsions in mind, the school allows the kids to continue ragpicking or selling knick-knacks at traffic lights. They study whenever they have time.

Delhi is home to over 50,000 street children, according to civil society estimates.

“The idea is to get these kids admitted in municipal primary schools after some preparatory education at our centre,” Zahir Elias, the project coordinator, told IANS.

The bus parks itself at a spot and conducts school every alternate day of the week for children in two shifts in the age group 3-5 years and 6-14 years.

At the heart of launching this school on wheels was a baseline survey by the NGO which found that parents were willing to send their children to school if it did not interfere with their work as earning members.

Elias said: “Our focus is to keep children enthused towards education and make them determined to study. Post the survey, we had a series of motivational interaction with the community.

“Our aim is to free them from labour and integrate them with the mainstream education and society,” he added.

The mobile centre aims to cover over 2,000 streets in the capital. They also plan to tackle the drop-out rate among such children by motivating them.