New Delhi: Celebrated Western music conductor Zubin Mehta says he is keen to perform in Jammu and Kashmir as the state “has gone through difficult times” and music has the power to heal.

“I told (erstwhile ruler) Karan Singh that he has to be there when I play in Jammu and Kashmir,” Mehta, 76, said about music preaching the gospel of peace on strife-torn turfs.

The Mumbai-born music director for life of the Israel Philharmonic Orchestra was in the national capital Sunday night to receive the highest German civilian award, the Cross of the Order of Merit of the Federal Republic of Germany in a glittering ceremony at the residence of the ambassador, Michael Steiner. Mehta was accompanied by his wife Nancy.

Soon after being conferred the award, Mehta said that “music has a social and spiritual responsibility in bringing people together”. 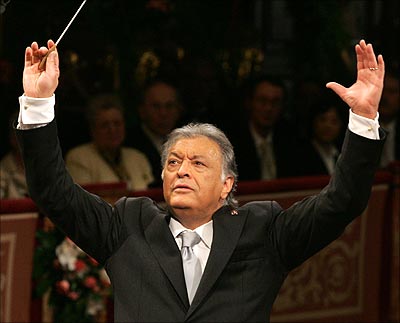 On his part, the German envoy is seriously considering Mehta’s proposal by exploring the possibility of a “suitable open air venue in Srinagar”. Steiner said he would move the culture ministry and the Indian Council for Cultural Relations to make Mehta’s dream a reality with a “quality orchestra from Germany which would be conducted by Mehta”.

Mehta’s association with the Kashmir Valley dates back to 1974 when he first came to India on a vacation with his wife and children. The Mehta family went to Kashmir. “We fell in love with it and we went to Amarnath. We were also went to Leh, where we stayed in an army guest house. The Ladakhis would follow my wife because she was tall and blonde,” he said.

Just how powerful music is in building bridges can be gauged from Mehta’s efforts in bringing together Arabs and Jews in Israel, a country where he spends the maximum time. He has homes in Tel Aviv and also in New York.

“We teach western classical music to young Arab kids in a school in the city Acco north of Israel. The Arabs and the Jews live together in the town and during concerts, they sit together and listen to Beethoven. For two hours there is peace in the hall,” Mehta said.

He said his school in northern Israel helps the Arab children “reconnect to their traditional music”.

“They play their own music first and then they play Vivaldi and Bach. Seven of the Arab students are in my music school in Tel Aviv University. My dream is to have one or two of these Arab students in the Israel Philharmonic Orchestra one day. But they have to apply on the basis of merit.”

He also felt that Western music must be taught in schools on a mandatory basis the world over.

“Western music must be taught in schools across the world on a mandatory basis,” Mehta said, adding “as music was an acquired taste in India, which had its own glorious musical lineage, it would take some time for young people to appreciate the music”.

Toward this end, building a concert hall in the national capital would help foster appreciation for Western classical music across all sections of audiences.

“A concert hall will go a long way in imbibing love for Western classical music with frequent concerts,” he said.

Mehta also noted that building a concert hall in Delhi for 2,000 people at $50 million should be small change for the Indian corporate giants.

“I don’t see why you can’t you have a concert hall here. The government can always always give them (corporates) tax deductability,” Mehta said.

The maestro is an Indian at heart and still clings on to his Indian passport. “Every time I step off the plane in Bombay (as Mumbai was then called), I feel I am at home,” Mehta said. He remembers his “childhood at Cuffe Parade, schools, walks through Colaba, friends and mother’s (Parsi) cooking.”

Mehta is paying back to Mumbai with a school for Western classical music that teaches 200 children. Housed in two apartments at Cumballa Hills Road in Mumbai, the Mehli Mehta Foundation of Western Classical Music teaches students to play the pianoforte, cello, violin and viola – and sing – with the help of the Mehta family members and guest faculty.

“The apartments are also guest houses where the teachers, who come from abroad stay,” Mehta said. The musician hoped that some day “his school will produce musicians for an Indian philharmonic orchestra”. The school has waiting list of 200 students for the coming academic session.

Mehta was born in 1936 in Bombay and received his first musical education under the guidance of his father Mehli Mehta, who was a noted concert violinist and the founder of the Bombay Symphony Orchestra.