Dehradun : Even as concern is being expressed the world over to save the dwindling number of tiger population in the country, the forest and wild life departments of Uttarakhand government in general and the Corbett Park authorities in particular are throwing the ball in each other’s court over the tiger deaths in the state and deteriorating conditions and encroachments in the Park.

Construction of a 5 Km metalled road right through the heard of the Park, allegedly to allow access to the visitors and customers of a holiday resort in the periphery has now come under media glare.

And with the issue being raked up as to how the road was allowed to come up without the no objection certificate of the union Ministry of Environment and Forests and the Corbett Park authorities, the Central Empowered Committee CEC) of the Supreme Court has stepped in.

Notices have been issued to the central government, Uttarakhand government, Director Corbett Park and the divisional forest officer in the matter regarding the construction of the road and whether it was made to give benefits to the owner of the resort.

Meanwhile it has now come to light that the Uttarakhand forest department and the Corbett Park Authorities also undertook an agreement with the resort owners giving them on lease for angling rights in the Ram Ganga River free of cost.

It was also stipulated in the agreement that should the forest department or for that matter the Corbett Park authorities want to undo the agreement, they will have to pay a heavy penalty.

The clause has now become a tread mill round the neck of the concerned authorities. 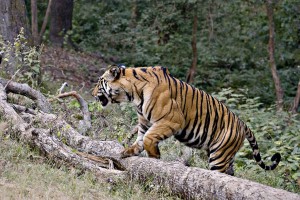 With a large number of tiger deaths being reported in the state during the last two years and even signs of poachers killing tigers in the Corbett Park area having come to light, besides the news of three tiger cubs being charred to death in a forest fire that blazed through the Park area recently, a team of the National Tiger Conservation Authority came on a fact finding visit to the Park and its immediate environs.

Informed sources revealed that the team has given its report to the union Ministry of Environment and Forests.

However, apathy of the state government towards Corbett and the large tiger population in Uttarakhand can be gauged from the fact that no efforts were made by the concerned authorities to meet the Conservation Authority team and know of the shortcomings that they had found so that they could be removed to protect the tiger population in the state.

They went on to add that the immediate vicinity of Corbett Park had over the years become a major investment area and anyone who is or was someone has either encroached upon the buffer zone of the Park to make a resort, in completion violation of rules.

A present cabinet minister in the Congress government in the state is also one of the many resort holders in the sensitive area.