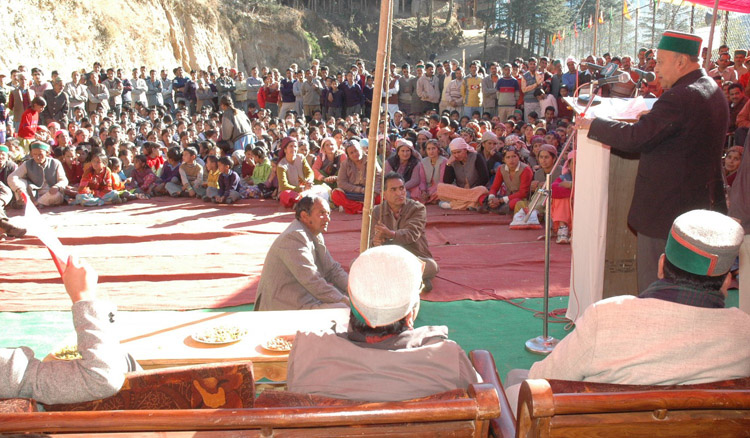 Rohru: HP Chief Minister said that women were the most significant part of the society and were instrumental in maintaining the social status besides contributing towards the farming sector. He said that his Government had dedicated the current financial budget to the women of the State, as a number of new schemes were started for their socio-economic upliftment. He said that his Government had started women empowerment schemes to help them earn a respectable place in the society and to be self-reliant in all respects. He said that special schemes had been launched for the poor and deserving women besides introducing Mukhya Mantri Kanyadaan Yojna to help the girls of poor families to get married. He said that the State Government had constituted the Women Welfare Commission and Social Welfare Board which were protecting the women in all respects and catering to their welfare needs.

Shri Virbhadra Singh said that his Government had provided 33% reservation to the women in the panchayati raj institutions and over 37 percent women got elected in the last panchayat elelction. He said that it was the dream of late Shri Rajeev Gandhi, who wanted overall in the development of the gram panchayats. He said that there was competition tendency in women representation to get maximum developmental activities executed expeditiously which was a healthy democratic trend.

Chief Minsiter said that the State Government was providing free education to girl from lowest to the highest standards besides scholarships and free text books to the deserving categories. He said that special programme had been launched in the developmental blocks where women literacy percentage were low to bring them at par with others. He said that compared to national by now had crossed to 75 percent. He said that girls were achieving higher percentage in all the examination and competition which speaks of the competitiveness among the women.Shri Virbhadra Singh said that his Government had provided social security pension to the widows and re-marriage grant to the person marriage a widow who would get Rs. 25,000 an incentive to strictly rehabilitate the widows so that she could lead socially a sincere life. He said that his Government was spending almost half of its budget over the social welfare sector for which the State had been awarded at the National-level. He said that 2.12 lakh deserving persons were being disbursed Rs. 54 crore annually as social security pension and there was no limit to extend the benefit to the deserving persons in the State.

Chief Minister emphasized the need to adopt multi-culture-farming in a big way and called women to come forward since they were the major contributors in promotion of farming activities. He said that the State had best horticulture net-work and farmers were progressive and willing to adopt modern modes of farming. He said that cash crops and off-season vegetable were being cultivated by the farmers which further needed to be extended to the rural areas so that the farming could emerge a profitable avocation besides horticulture. He said that there was vast scope of self-employment in it.

Shri Virbhadra Singh said that credit goes to women for making Himachal Pradesh the â€˜Apple State of Indiaâ€™ since the rural women had been carrying out the horticulture activities dedicatedly. He said that need had emerged to take optimum benefit of the cultivable land available with the farmers so that the same could be utilized for continue income generation activities for future generation as well. He said that mothers needed to inculcate the spirit of respect to the elders, moral values etc. in their children to make them responsible citizens who could share the responsibility of making the country progress ahead leaps and bounds.