Kullu Manali: Local red rice crop of Kullu Manali valley that has much medicinal and food value is fast vanishing.

Farmers of the valley in dire straits to latch upon a commercial cash crop economy of growing fruits are fast converting their paddy fields into orchard lands without much consideration of leaving out traditional crops. 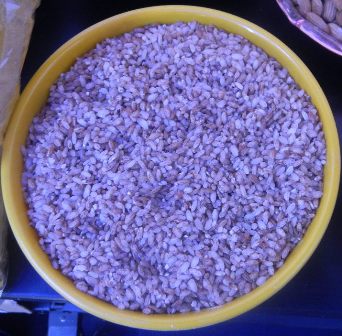 Red rice, introduced into the valley about 250 years ago, can only be cultivated at the height of more than 5,500 feet.

According to experts, red rice is highly beneficial food for diabetic patents and is a totally organic produce with farm yard manure.

They believe that there is a lot of scope for the export of the rare traditional rice crop and the valley farmers should be educated about the its true commercial value that would encourage them not to drop the practice of cultivating red rice.

Though rice transplantation in paddy fields is in full swing these days in Kullu valley but over the years production of red rice has come down drastically.

Though some farmers on both the left and right bank of River Beas are still cultivating the traditional crop but many have switched to growing apples, a lucrative cash crop, and other fruit crops.

Paddy cultivation is still in vogue around Marhi, Parsha, Bror, Baragran, Kais, Gazan,Karjan, Rangri and Chhaki and are an attraction for tourists also.

Some farmers who have taken to fruit cultivation, have regrets as the cash crop is unable to meet the needs of the traditional kitchen for the price of red rice in the market has more than doubled in the last two years itself.

Yamuna Devi, a resident of Karjan village on the left bank of Manali laments while speaking to Hill Post, “it is unfortunate that many people are leaving cultivation of traditional red rice, whereas the crop has proved to be the mainstay of our economy for generations.”

Rice cultivation provided much employment to local women but now that many people have taken to fruit cultivation, skilled labour has been to hired to pick and package the fruit to be marketed, said Yamuna.