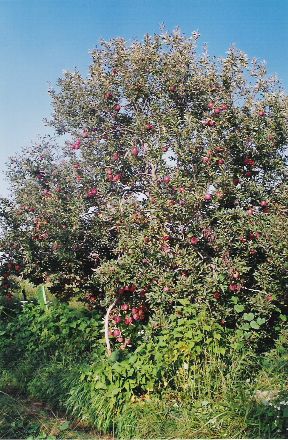 Manali: Monsoon rains over the last few days in Kullu – Manali valley has come as big relief to apple growers as it has helped to gain soil moisture at a time when the crop is maturing.

Timely rains are not only helping to increase fruit size and quality it is also reducing the impact of mite related diseases, says Tek Chand, a horticulture officer.

Estimates of apple crop in Kullu valley have been projected at 155,255 tons for the year much higher than the 48,920 tons that was recorded in the previous year, he said.

Support price of apple under the market intervention scheme has also been increased from Rs 5.25 per Kg last year to Rs 6 per Kg this season, he added.

With the fruit adapting well to the valleys climatic conditions, soon more apple came up at Manali, Raison and Naggar.

“In a generation, a subsistence economy was transformed into a cash crop one making fruit growing a self sustaining economy, said Thakur.