Dehradun : Much to the chagrin of the people of Uttarakhand, the issue of hydro-electric projects on the Alaknanda and Bhagirathi rivers have come rom the purview of the sages and sants and pro-hydro project loyalists and now have taken political hues.

It is now BJP and Congress that are picking up cudgels over the issue, though initially the bone of contention was the 320 MW Srinagar hydro-electric project.

The ante by BJP against the project is that it will submerge the Dhari Devi temple near Kaliyasaur, that is located along the banks of the Alaknanda river.

A high level delegation of the BJP, led by none other than the party parliamentary board chairman, L K Advani and its national president Nitin Gadkari met prime minister Manmohan Singh at Delhi yesterday on the issue. Manmohan Singh is chairman of the National Ganga River Basin Authority (NGRBA).

Though the delegation urged the Prime Minister that work on the project be completed in a manner that the sanctity and security of the temple is not affected, but the temple is in all likelihood to be submerged by the back waters of the dam, once the project is completed.

Pleas by the pro-dam lobbyists that the temple will be uplifted and relocated at a higher spot so that the pilgrims can offer their prayers at the shrine are not being accepted by those opposing the project, including the firebrand BJP leader Uma Bharti.

Even assurances by Manmohan Singh, that the shrine will be protected and not allowed to be submerged, has a few takers.

Meanwhile a cabinet minister in the Vijay Bahuguna government, Mantri Prasad Naithani plans to undertakw a fast unto death at Jantar Mantar in Deljhi from July 10.

Incidentally, Naithani who is a Congressman had quit the party in the March 2012 vidhan sabha elections in the state and contested as an independent on being denied the Congress ticket.

However, on winning he sided with the Congress that has a razor thin edge over the BJP, to give the party a majority alongwith other independents and BSP members.

Naithani claims that the Congress high command has given the green flag for his fast unto death at Jantar Mantar, where he also hopes to garner support for the pro-dam and hydro-project lobbyists in the state, which has the backing of the corporate lobby.

Chief minister Vijay Bahuguna has been batting for hydro-electric projects in the state from day one of assuming power. 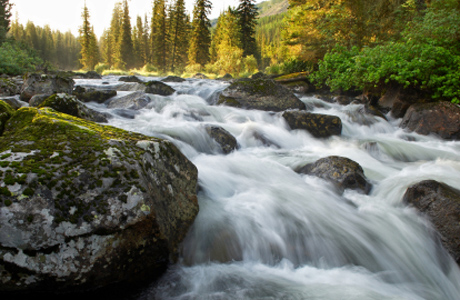 Besides advocating the need for why hydro-electric projects need to come up in Uttarakhand, he has also met the sages and sants, including the Shankaracharyas, who have come out openly against their construction on the Alaknanda, Bhagirathi and other tributaries of the Ganga on the plea that they would affect the free flow, sanctity and purity of the river.

Though the Srinagar project is almost 80 per cent complete and should be allowed to come up by relocating the Dhari Deviu shrine, as it will be colossal waste of thousands of crores of rupees, but allowing other projects on the river should be re-examined by a high powered committee of environmentalists and ecologists on the affects that they will have on the fragile ecology of the Garhwal Himalayas.

And as to why is the chief minister batting for hydro electric projects. It is now well known that his son is the CEO of India Bulls, which reportedly has a number of allied companies that are in the hydro-electric field.

It is obvious once hydro-electric projects are allowed on the Ganga ant its tributaries, these companies will become the major players in this nascent hill state.