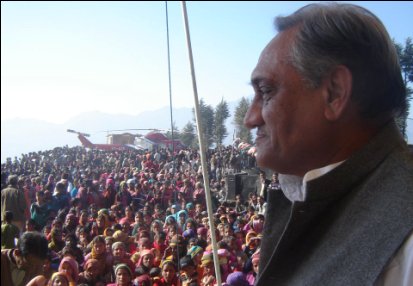 Dehradun : Campaigning has yet to hit a high note at Sitarganj, from where Uttarakhand chief minister Vijay Bahunguna is a candidate in the by-election.His stakes are high as he has to win to make it to the vidhan sabha and remain the chief minister, as he is is not a member of the state assembly.

Should he lose, it could well be curtains for the man, who got to the post despite strong resentment by a section of the Congressmen.

Reasons for the campaigning not picking up to the expected levels are obvious as far as the Congress is concerned.

Bahuguna himself is against a number of the partymen campaigning in the small assembly segment, because of the fact that it is from the Kumaon segment that he faced the maximum opposition after being nominated the chief minister by the party high command. His fears are that there could be back stabbing, which could cost him dearly.

It is perhaps for this reason that campaigning is being done mainly by him and his family members including, Rita Bahuguna Joshi, president Uttar Pradesh Congress Committee and sister of the chief minister.

Bahuguna defended the campaigning being confined to his family by saying that it was a tradition in the family and even when his father Hemvati Nandan Bahuguna contested an election, it was the family members who were at the forefront of the campaigning.

However, what the chief minister did not say is the fact that his bete noure in Uttarakhand politics, union minister of state Harish Rawat is keenly looking forward to a debacle at Sitarganj, which could yet pave the way for his making it to the chief minister’s chair.

Rawat has yet to come to terms with the fact that despite having the majority of legislators on his side, he lost out to Bahuguna for the chief minister’s post and party insiders claim that he could go to any levels to prove his point – that he is more popular in the state that the chief minister.

Another intriguing factor in Uttarakhand is the Garhwali versus Kumaoni. It is not just after Uttarakhand came into being about 12 years before that this factor came up, but was in existence even earlier.

Only after the state was carved out from Uttar Pradesh, the feelings of one against the other have become more intensive.

And ironically Bahuguna happens to be a Garhwali contesting from Kumaon, which is not going to be taken lightly, despite the fact that ‘paharis’ do not form a  major chunk of the electorate.

And as far as the BJP is concerned, the party has yet to put its act together in the state after its poster boy and former chief minister Lt Gen B C Khanduri lost from the Kotdwara assembly segment in the last vidhan sabha elections.

The second jolt it got was when its MLA from Sitarganj, Kiran Mondal resigned from the vidhan sabha to vacate the seat for the by-election for Bahuguna.

The BJP is now alleging that the Congress gave Rs five crores to Mondal to vacate the seat for the chief minister. This has become the gist of a hush hush campaign launched by the party to expose the corruption in the BJP.

With less than a week left for the hustings, it is very doubtful that many star campaigners will come either for the BJP or for the Congress, despite lists having been released by both the parties.

But the BJP surely missed out in getting its youth icon Varun Gandhi and his Bengali wife to Sitarganj to woo the majority of Bengali voters who could tilt the scales either way.

In fact the Congress has stolen the edge buy promising the Bengali refugees from what was East Bengal earlier and now Bangladesh who were rehabilitated here decades back, right to ownership of land that was leased out to them. This was their major demand over the years.