The superb co-ordination, accurate passing and high speed scoring deservedly brought glory to Spain in Euro2012.Spanish fans were treated to such a memorable victory that TV channels will keep replaying this match for quite some time. 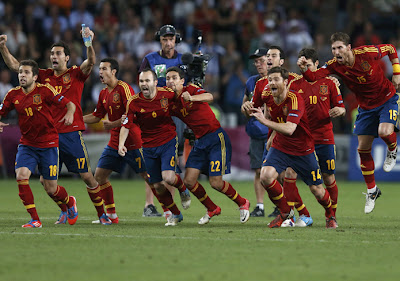 Watching the final and other matches before often transported me to my own soccer days’ way back in school. We called it “footer” then, in line with having a slang word for each popular thing or being.

We lived near Annandale in Shimla and had neighbours who had lived much longer in the same place. Before the Army takeover (and the accompanying banishment of local people from their Eden), Annandale was the hub of football (and much else) in the town or perhaps north of Delhi.

As little kids we knew about the Durand Cup and had heard tales of how bare-footed local teams (like Dwarka Prasad’s Gorkha Eleven) had often out-paced, out-witted and out-scored the bigger, well booted and soccer serious teams, largely British or the Army.

While local teams had few fans then, mostly kids like us who were more interested in playing their own ‘match’ on the sides, one can imagine the feeling of elation and jubilation after winning against such formidable teams. Revenge of the Natives!

It was in Annandale that we learned how the football rolled and how the game was about taming that roll to one’s will. Also, that to win a match good passing was crucial; not passing the buck!

As pre-school boys we would often play bare-footed or some with “fleets” (canvas shoes) as they were called. Like those brown coloured canvas shoes that were issued to Army jawans?

Proper football boots came later, in school. So, before we were ready to play more serious footer, we had inherited a feel for the game. And it was in our feet.

As luck would have it, in those days St Edward’s school was run by Irish brothers. I suppose coming from that island and with few other temporal distractions allowed to their Order (they were allowed to eat chocolate though), they were really passionate about football and the IRA.  And were good at coaching too!

The younger among our Irish teachers would join us in the field where we had some of the finer points of ball control, dribbling and attitude drubbed into us.

One day our Principal, a six and a half foot German hulk (how he joined the Irish Brothers is a little known mystery of WWII), glared at me and shouted, “Will you stop hitting that ball in the direction the opponent is charging in from and pass it in the other direction!?”

I remembered that and later got selected for the school eleven, all of five feet tall.  When we had inter-house or inter-class matches, the padres alone would stand and watch and cheer and shout.

They were ‘playing’ with their teams and how I am sure they would have yearned to actually join the game and tear after the ball or belt it sky high!

After school we did play football a little in college and elsewhere. But the game was in terminal decline in the country.

Cricket, perhaps because of its elitist and vicarious nature and its political economy (especially as TV reached millions), began to hog the popular sporting imagination and inspiration and corporate funding to the detriment of all other games and sport, almost.

Cricket became such a popular game because you don’t have to play it, even as spectators.

So, even as I sat back late into the night, bleary eyed and watched Euro 2012, the feel and the flashes, the shove and the surge from a long gone past, brought the pleasure and the passion of ‘footer’ back, like a joyous rebound from the goalposts of memory.