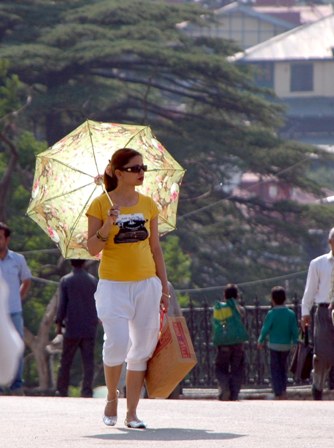 Shimla: Temperatures sizzled in the hill state with the mercury touching a high of 44 degree Celsius, five degrees above normal, at Una making it the hottest place in the state in the current spate of heat wave that has not spared the state capital where days high temperatures touched 30.5 degree Celsius.

Faced with water shortages, the municipal authorities here have announced water rationing with supplies only be released on a third day basis, a spokesman of the Shimla corporation stated.

The heat spell is also causing numerous forest fire breakouts as several blazes have been reported from various parts of the state.

Where Sundernagar and Mandi recorded the days high at 41.6 degree Celsius, it was 38.2 at Bhunter in Kullu and 37 at Dharamsala and Nahan. Kalpa in Kinnaur recorded 26.2 degree Celsius.

With a low temperature recording at 8.4 degree Celsius at Keylong in the high altitude tribal district of Lahaul-Spiti it was the coolest place in the state followed by Manali at 12.4 and Kalpa at 14.9 degree Celsius.