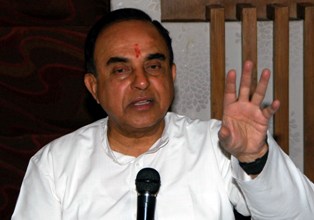 Shimla: Strongly opposing the move for sub-quota reservations on religious grounds, Subramanian Swamy has stated that with rampant corruption being relentlessly exposed in the UPA government, raking up the reservation issue for minorities was Congress party’s attempt to divert public attention and garner support of Muslims.

Swamy, who is here to support the state’s anti-conversion bill that has been challenged by Christian organizations in court, accused Congress president Sonia Gandhi as being behind the move to provide 4.5 percent reservations for Muslims.

“I would fight against it as I’m totally against any religious based reservations,” he said.

Hailing Himachal Pradesh’s ‘Freedom of Religion Act, he said that Orissa and Arunachal Pardesh had also enacted such progressive legislations and similar bills passed by Rajasthan and Gujarat were awaiting presidential assent.

Taking on Team Anna, the Janta Party chief Swamy said the civil society members were only taking on Manmohan Singh, a softer target, while totally sparing UPA chairperson Sonia Gandhi, even though she was mainly responsible for the prevailing corruption in the government.

Pointing out that Sonia Gandhi enjoyed cabinet rank status, he questioned as to why Team Anna had not included her name among the 15 corrupt ministers who needed to be probed.

Cautioning the civil society members of playing into her hands, “the whole exercise is being enacted to force Manmohan Singh to step down and thrust a novice Rahul Gandhi into the PM’s position. He would only prove a disaster for the country, said Swamy.

Though showing support for a strong Lok Pal bill, a key demand of Team Anna, the prominent lawyers said, “it would not be the only forum to obtain justice and I have shown that one can expose people and government functionaries to get justice under the prevailing legal system.”

About Team Anna members expressing support for Sonia should she bring back black money stashed in foreign banks, he alleged “why should she do so, after all she and her family have large amounts parked in these secret accounts.”

Blaming the government for the fall of the rupee against the dollar, he said the government had allowed flight of Rs 1 lakh crores from the country through the hawala route in the last three months.

Showing his displeasure about the Communal Targeted Violence Bill, he claimed that it was proposed at the behest of Sonia Gandhi. “I’m opposed to it as it is anti-Hindu,” he said.

Congress should not forget its own communal past, he said as he recalled the killing of many Sikhs in Delhi after the assassination of Indira Gandhi, shooting of Muslims at Hassanpur near Meerut and communal carnage in Assam.

Not sparing union home minister P Chidambaram, Swany claimed that he had many documents in his possession that would land the minister in jail.