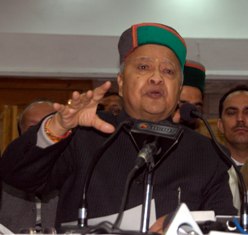 Shimla: Without considering a contentious audio CD as admissible evidence, a trial court here today framed charges against union minister Virbhadra Singh and wife Pratibha Singh – holding that there was enough evidence on record to show strong suspicion of their involvement in a corruption case.

After taking on record the evidence produced by public prosecutor JL Sharma in the high profile case, special judge BL Soni concluded that “a cement plant was to be accorded approval by a subcommittee of four ministers but accused Virbhadra Singh accorded approval without obtaining consent of two ministers (then education and transport ministers).

The matter pertains to establishment of Gujarat Ambuja cement plant in Dharlaghat and installing of an effluent treatment plant by Mohan Meakin brewery in the year 1989-90.

Prosecution have alleged that it was only after having received the illegal gratification that clearance was given to the cement plant and Mohan Meakin was granted time for completion of the plant / machinery.

The trail court order mentions, material on record shows that when Suresh Neotia, chairman Gujarat Ambuja Cements and PC Jain, then a general manager met Virbhadra Singh at Himachal Bhawan, New Delhi, an application for grant of approval to cement plant was pending with director of industries.

Though Neotia has not been examined by investigators about the incident that happened in later part of 1989 and early 1990, “the materials on record would show that after payment of illegal gratification to the accused persons, the matter of clearance of the project of the cement plant suddenly gained speed and project was cleared in February 1990,” the court order mentions.

The judge observes that “it cannot be said that there is no material at this stage to show the involvement of accused persons in getting illegal gratification —- the payment of gratification can be proved by leading cogent evidence.”

The court overruled the defense counsel RS Cheema’s argument about delay of 21 years in recording statements of witnesses by relying on the Supreme Court 2007 judgment in Japani Sahoo Vs Chandra Sekhar Mohanty case by stating “in criminal justice a crime never dies.”

The prosecutions have also alleged that Pratibha Singh, who wielded sufficient personal influence over accused Virbhadra Singh, gave assurances for clearances of these projects.

With regard to installment of an effluent treatment plant (ETP)by Mohan Meakin Brewery, Solan, the matter was pending since 1983 but in February 1989, the member secretary of state pollution control board threatened to disconnect water and electricity supply if the treatment plant was not installed.

A statement of Kapil Mohan, managing director of the brewery, states that the ETP would require 70 to 80 lakhs of investments.

On instructions for Kapil Mohan, the prosecutors contend that Rs 2 lakh was paid to Pratibha Singh, through Mohan Meakin employees Suresh Kapoor (now deceased) and HN Handa in the presence of bureaucrat Mohinder Lal.

The company that was avoiding an extra expenditure of upto Rs 80 lakhs for installing an ETP, was further granted time for completing of the plant / machinery.

Since the trial court is restrained by a high court order of January 7, 2012 to proceed further with the trial unless given a nod by the HP High Court, the trial court judge has also recorded that the case would be taken up after receipt of further orders from the superior court.

Under a question over admissibility of evidence about an audio cassette that the prosecution produced and played in court during a hearing, the judge cited the Supreme Court case Nilesh Dinkar Paradkar vs State of Maharashtra, 2011 and observed that applying the admissibility test laid down by the apex court “this piece of evidence fails in admissibility test.”

However, the judge at the same time observed, “Even if this evidence is excluded still there is other material and evidence which throw strong suspicion as to the involvement of the accused persons herein.

The audio cassette was considered as vital evidence through which the prosecution intended to establish a criminal conspiracy connection between Virbhadra Singh, Pratibha Singh and Mohinder Lal in the case.

The audio cassette holds old phone conversations wherein a talk about illegal money transactions between the three of them is alleged to have been recorded.

Referring to the audio cassette which was released by former congress leader Vijay Singh Mankotia to media persons at Dharamsala in May, 2007 and was the very basis of registering the corruption case, the judge observed, “there is nothing in the prosecution case as contained in the charge sheet which could show who recorded the conversation, on which instrument it was recorded and when it was recorded.”