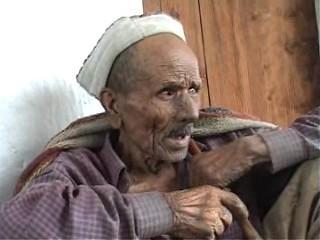 Shimla: Like Tiresias in TS Eliotâ€™s The Waste Land, Bhadaru at 127, has seen it all. Fall of a mighty colonial power, rise of a democracy, a changed world order, falling values, rising temperatures and more.

Through a heap of broken images, he gazes upon a opaque world still carrying a hope that his village Juggar will someday be connected with a motorable road.

â€œI will vote,â€ he affirms his faith in democracy, like he has done since 1952. â€œThen it was Nehruâ€, he recalls.

Though there is no independent proof about the age of this senior voter spending time on a cot at his small house, but the electoral roll of the election commission counts Bhadaru as probably the oldest voter not just in Himachal but the country.

Overcoming his senility, the near deaf and blind man says he was born in the month of Bhadar (Sept-Oct), as he had been named after the month of his birth. The illiterate Bhadaru counts his years in the number of springs lived and claims to have seen 150 of them. He also recalls his fatherâ€™s name as Karmu.

A centuryÂ  ago, compulsory registration of births and deaths had not been introduced in the country.
.
â€œShimla was a city for Angrez Sahibs and Memsahibs,â€ he says. When, once Mahtama Gandhi came to Shimla, he along with some others village folk recalls trekking the 60 Kilometers to the city to get a glimpse of the great man.

He lost his wife long ago and is being looked after by 3rd and 4th generation family members.

Living out the dry summer spell, he says, â€œit did not snow in the winter, how will the crops grow?â€