Shimla: If all goes well, the historic Town Hall here could be restored to its Gothic glory and people will be able to saunter on cobblestones on the famous Mall Road.

The Town Hall, one of the 91 British-era buildings in this Himachal Pradesh capital, and the Mall Road are to get a facelift, thanks to a Rs.19 crore ($3.3 million) loan from the Asian Development Bank (ADB). Of this, Rs.14 crore will be spent on the Town Hall and Rs.5 crore on beautifying the Mall Road and creating leisure plazas, an official said. 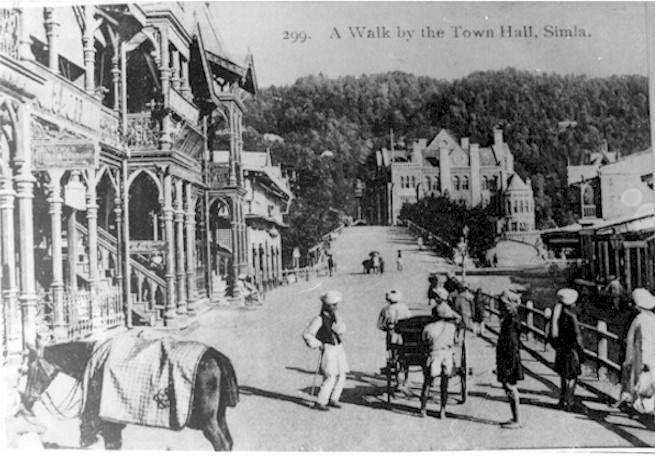 Built in 1908 with stone and timber, the Town Hall currently houses the Shimla Municipal Corporation.

“The entire building will be restored and conserved aesthetically, keeping in mind its original Gothic style architecture, within two years. For this, a loan of Rs.14 crore (Rs.140 million) to the department of tourism has already been approved by the ADB,” says Arun Sharma, its director.

He said the exteriors and interiors of the building, built in the half-timbered Tudor style – all wooden frames and shingled eaves -would undergo massive restoration work.

“The process has begun to move the municipal corporation out of the Town Hall building and start the restoration work as early as possible,” Sharma said.

Officials involved in its restoration said the use of slate for roofing, glazing work inside the complex and ornamental stonework on the outer walls would be done as per the original pattern.

“Its revival is really a herculean task. Before starting its renovation, we have to carry out research to ascertain that the restoration will gel with the original architecture and style,” an official added.

He said like the restoration of Gaiety Theatre in 2009, lime mortar would be used in place of cement.

As for the Mall Road, it is set for a facelift with the asphalt road surface being replaced with European-style cobblestone patterns.

Welcoming the decision to restore the Raj-style structure, Intach (Indian National Trust for Art and Cultural Heritage) Himachal chapter co-convener Raja Bhasin said: “We welcome it. The restoration should be done carefully and aesthetically like the Gaiety Theatre.”

The conservation project of the Gaiety Theatre was completed in 2009 after six years.

Tracing the Town Hall’s history, Bhasin said it has been the centre of municipal activities in Shimla right from the day it was opened in 1908.

The municipal committee of Shimla passed a resolution Oct 21, 1880, for setting up a public building to serve as town’s civic offices as well as for public meetings, banquets and concerts, tourism department archives say.

“Any other town in the world of the same size or importance as Simla and a seat of the government would not be absolutely without a public hall as Simla now is. There is no room in any building in Simla where His Excellency the Viceroy or the Lieutenant Governor can hold even a small durbar, or where public meetings or gatherings can take place with safety or without overcrowding or inconvenience,” the resolution reads.

The “Queen of Hills”, Simla, as the town was then called, was the summer capital of the British colonial rulers.

More than 60 years after the British left, this town still attracts their descendants who are eager to explore their roots.

Sadly, the imperial grandeur of the buildings that were once institutions of power are slowly fading into oblivion.
Some of the monuments and buildings have been damaged or refurbished, while others have simply vanished.

“Shimla is a far from the city the British had visualised. Its glorious past is now history. So many relics have disappeared – either stolen or damaged,” says M.R. Kaundal, an octogenarian who  settled in Shimla in 1950.

“The hydrants, once used to clean the Mall and the Ridge, are either missing or have been rendered useless. Even stately emblems, which once adorned the majestic banisters along the buildings housing government offices, have disappeared,” he pointed out.

However, there are some honourable exceptions: Ellerslie, housing the state secretariat; the Vidhan Sabha; Peterhoff, which was completely renovated after being devastated in a fire nearly two decades ago and now serves as the state guest house; the United Services Club; Barnes Court, which is the Raj Bhavan; the Viceregal Lodge, which is home to Indian Institute of Advanced Study; and Gordon Castle.