Mumbai: The Indian rupee slipped to a record low of 55.05 against a dollar in the intra-day trade today, breaching a key psychological level, as importers, especially oil firms, increased buying of the American currency to meet month-end demands. 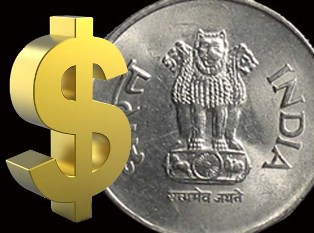 The rupee ended the day at a record low of 55.03 against a dollar after slipping to 55.05 in the intra-day trade at the Interbank Foreign Exchange Market here.

This is the fourth consecutive record intra-day low of the rupee in the last four sessions. The Indian currency had hit a record low of 54.91 against a dollar Friday.

Analysts said rupee is likely to weaken further due to gloomy macroeconomic data and uncertainties in global economy.

“We expect it to depreciate further in the coming few months. Short-term measures by the RBI may not assist in reversing the trend,” said Anis Chakravarty, senior director at Deloitte in India.

“The cause cannot be fully attributed to the Eurozone crisis. Weak macroeconomic numbers coupled with high current account and fiscal deficit are largely responsible for the situation. Concerns on economic reforms and weak growth are adding to the issue,” he said.

The Reserve Bank of India (RBI) has taken a series of measures in the last few weeks to curb the rupee slide.

The RBI has asked banks to sell half of the foreign currencies in their accounts. In a bid to attract money from overseas, the RBI has raised interest ceiling that local banks can offer to overseas Indians in forex accounts.

The RBI has opened a direct dollar window for oil companies, which are worst hit because of the weakness in the domestic currency as they have to pay higher money for the same quantum of import.

Expressing concern over the slide in the value of the currency, Finance Minister Pranab Mukherjee Sunday said he was taking steps to overcome the situation.

“We are watching. The centre is not sitting idle. We are trying to resolve (the issue),” the finance minister said in Kolkata Sunday.